Source: PTI
December 18, 2011 13:59 IST
Social activist Anna Hazare, spearheading an anti-graft movement demanding for a strong Lokpal, was on Sunday greeted with black flags by a fringe group on his arrival at the airport in Chennai.

Five persons of Makkal Sakthi Katchi were arrested for showing black flags to the 74 year-old activist, alleging him to be against reservation policy and demanded that he go back.

The airport police arrested the five men when Hazare landed in Chennai to attend a series of events including addressing a public gathering in the evening, besides attending a special screening of a movie, Welcome back Gandhi, the Hindi version of Tamil film, Muthalvar Mahatma.

Hazare had addressed a huge gathering at Bengaluru on Saturday, asking the government to quit if it cannot bring an effective Lokpal Bill and accused it of "cheating" the country by doing a volte-face on its promises. 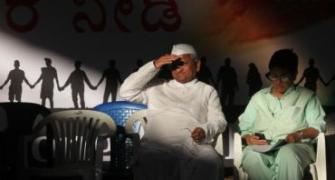 Anna writes to PM: Will the Lokpal Bill be PASSED? 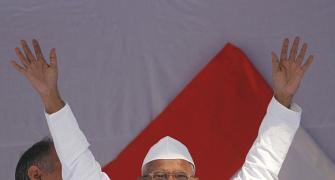 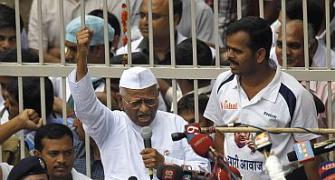 Hazare cancels Hyderabad tour, to return to Delhi on Monday 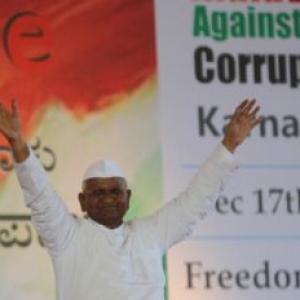