Source: PTI
May 10, 2012 17:49 IST
Zakia Jaffery, wife of Congress leader Ehsaan Jaffrey slain in post-Godhra riots, on Thursday moved a court seeking documents from SIT related to the probe carried out by the agency, based on her complaint against Gujarat Chief Minister Narendra Modi and others, with regards to the 2002 violence.

The documents include preliminary inquiry report of SIT official A K Malhotra submitted to the Supreme Court on May 12, 2010, further investigations reports filed periodically by the agency in the apex court and comments of SIT chairman R K Raghavan dated May 14, 2010.

However, lawyer of SIT R S Jamuar opposed her application, saying the Supreme Court had directed to provide final report and documents related to the probe.

"Most of those reports which are being asked by the complainant were given in a sealed cover to the Supreme Court and if they wish they can obtain them from the apex court," Jamuar told the court.

After hearing both sides, Metropolitan Magistrate M S Bhatt scheduled the hearing on the application on May 19.

Zakia had to file compliance report in the court that she had received all the documents from the SIT related to her complaint.

Following the court's order, the SIT had given copies of its final report, including the report of amicus curaie Raju Ramhandran and other documents to Zakia on May 7.

In her complaint, Zakia had alleged complicity of Modi and senior officials in the communal violence.

SIT has given a "clean chit" to Modi in its closure report. 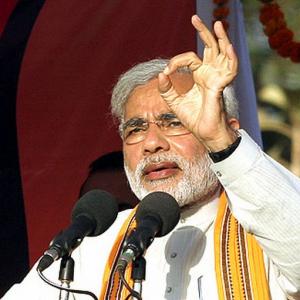 BJP hits back at Sonia: 'It's our right to expose govt'