'Gujarat govt has shown it is very good at disaster management' 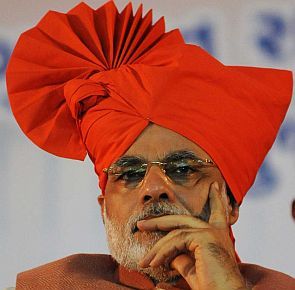 The evacuation of 15,000 Gujarati pilgrims following the visit to rain-devastated Uttarakhand by Chief Minister Narendra Modi has become the talk of the town. While the Bharatiya Janata Party cannot stop singing praises of its newly-appointed Lok Sabha poll campaign chief for this operation, the Congress, on the other hand, has termed it as an act of “opportunism and selfishness”.

For the BJP unit in Uttarakhand, Modi's rescue mission has come as a shot in the arm. The manner in which the entire operation was planned and executed should be applied as a role model for other states, the party points out.

Uttarakhand BJP spokesperson Anil Baluni, who was also the former vice-chairperson of the state forest and environment advisory committee, spoke with rediff.com about the operation carried out by Modi and his team.

“This is the season when the number of Gujarati pilgrims is the highest. Almost 25 per cent of the pilgrims are from Gujarat at this time. When the tragedy first struck, the Gujarat government sought to know the exact numbers. They geared themselves up since day one and did not waste time, and proved that they are very good at disaster management. Their approach was systematic since day one,” Baluni said.

“The first thing the Gujarat government did was to appoint a relief commissioner, Poonam Singh Pandey. They then decided to use the BJP network in Uttarakhand and reached out to each unit seeking help. They sent in four officers in the ranks of IAS and IPS to oversee the work and assist the relief commissioner. Each of these officers who were sent in was originally from Uttarakhand but was working in the Gujarat cadre. This was done to ensure that there was no problem where the locations or the language was concerned. They were able to converse and move around with ease since they were familiar with the place and this helped a lot in the rescue operation,” Baluni noted.

“This team spread across the state. Their phone numbers were shared with BJP workers in the state who were told that the numbers should be shared with the pilgrims who could get in touch with the relief commissioner directly. This made it very easy to communicate, as a result of which the rescue operation was successful. Along with planes, the government of Gujarat also sent in 100 buses to rescue the pilgrims. All the workers were told that the pilgrims who were caught up should be provided food and water until the rescue team reaches there,” he said.

“What Modi did was stunning and he decided to station himself in the flood-affected state for three days. This acted as a boon for all. The officers on the job were charged up and the fact that Modi was directly in contact with the workers charged up the entire team. This automatically gave us a lot of enthusiasm. Modi not only inspected the areas personally but also spoke to each of the workers despite all the danger. Unlike some Congress leaders he did not sit in Delhi and tweet about the operation or mock the rest who were doing work,” he added.

Modi wants to become a 'Rambo': Cong on his role in U'khand