Guj election proves it is not open skies for Modi: Cong

Congress leaders on Thursday conceded defeat in Gujarat, but said it was "not open skies" for Chief Minister Narendra Modi, nursing national ambitions.

"This Gujarat election proves that it's not open skies for Narendra Modi," External Affairs Minister Salman Khurshid told reporters apparently seeking to underline that the chief minister will not have an easy task ahead.

His remarks came in the backdrop of a section of the BJP projecting Modi as the most prominent prime ministerial candidate of the party in the next Lok Sabha polls.

Parliamentary Affairs Minister Kamal Nath sought to project the trends in Gujarat as an indication of improving popularity of Congress in the BJP-ruled state.

"In Gujarat, BJP had made tall claims that it will get 150 seats and that there will be a wave in its favour. But it has now been proved that Congress has emerged stronger and BJP is weak now," he told reporters outside Parliament House.

To a question on claims by Congress that BJP will be routed in the assembly election in Gujarat, he said, "We knew victory is difficult, but we were sure that we would emerge stronger."

Referring to the Himachal Pradesh assembly poll result, Nath claimed, "The defeat of BJP shows the direction in which the wind is blowing."

Congress is winner in Gujarat as it has improved its tally and contained BJP below 117, Finance Minister P Chidambaram said.

Source: PTI© Copyright 2022 PTI. All rights reserved. Republication or redistribution of PTI content, including by framing or similar means, is expressly prohibited without the prior written consent.
Related News: BJP, Congress, Narendra Modi, Salman Khurshid, Nath
Print this article
Nobody should lay down his life for India: Martyr's dad
LS drama: MP snatches quota bill, Sonia tries to stop him 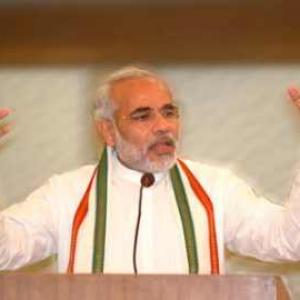 BJP evasive on question of Modi running for PM's chair