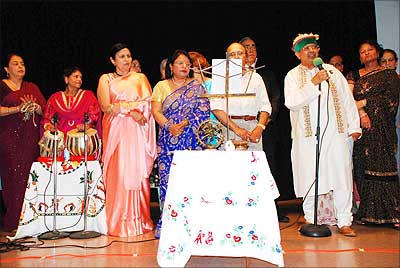 Over a year ago, three Washington, DC, area grandparents  Shashi Arora, Promila Banik and Dr Raj Mahajan  with a yen for singing but bashful to do it in public, began meeting in each other's homes to give vent to their talents and belt out melodies in perfect harmony.

Soon, they were joined by a common friend, Sree Kumar, who directs the local Spirit of India Programme and plays the harmonium, and by Sarvesh Mahajan on the tabla.

As friends began to come over to listen to the group over good food and drinks, the trio metamorphosed into a choir of more than 20 families, with Kumud Mathur, who runs a popular Indian dance and music studio in Maryland, bringing her talents on the tabla and percussion into the group.

Distinguished community activist Dr Sambhu N Banik, Promila's husband, who had earlier contended himself with preparing specialty cuisine for the choir and its growing band of fans, then stepped in as coordinator. Erstwhile World Bank official Dr Birender Singh and wife Avtar, a philanthropist and founder member of the Kaur Foundation, stepped in as patrons of the group now calling itself 'Sham-E-Ghazal'.

Last month, at the Potomac Community Center in Maryland, 'Sham-E-Ghazal' made its public debut to an audience including over 200 guests including Sanjay Sinha, minister, community affairs at the Indian embassy and his predecessor Anil Gupta, who was visiting Washington, DC.

These grandparents, who once shied away from performing in public, belted out songs with such gay abandon that the audience joined in. The programme started and ended with songs featuring all 22 singers. In between, there were individual performances, with Meenu Sidhu's Kende Ne, Dr Manohar Gulati's Me Nigha Ho, Daler Deo's Tun Se, Arora's Shanunaharwale, Brij Ahluwalia's Ap Ke Nazar, and the rousing duet by Promila Banik and Dr Mahajan, Ye Ratay, drawing sustained ovations.

The group was such a hit that the Indian Cultural Coordination Committee of the Washington, DC, area, which organises cultural activities for India's Independence Day Programme each year, has invited 'Sham-e-Ghazal', and given them top billing at this year's programme on August 17.

Members of the group told rediff.com that what brought them together and will continue to keep them together is the social and creative outlet it provides them - the majority of whom are grandparents in their 60s and 70s.

Promila Banik said, "It energises us and keeps us alive and young."

"A seed was planted and now it has grown into a large tree comprising more than 20 families, who meet at least once a month in the home of one of the families, practice our musical talents and socialise over a hearty home-cooked meal provided by the host family," she said.

"We also make sure that each one of the people present at these get-togethers gets an equal opportunity and sufficient time to present their songs, and there is so much laughter and revelry and fun," she revealed.

Shashi Arora said, "Sham-e-Ghazal has proven to be highly therapeutic for the mind and soul as well as for building self-confidence among many of us, who would have never imagined that we would have been singing among such a large group of people, let alone a public performance like at the Potomac Centre."

"Of course, it also helps us to create new extended family relationships among us who are mostly grand-parents, whose children have become adults and busy with their own families," she added.

Dr Anthony Anthoniswami, producer of the Spirit of India programme for over three decades, was so taken with the performance that besides congratulating Sree Kumar for 'outstanding and selfless service to promote the musical talents among these diverse group of grandparents and senior citizens,' said 'Sham-E-Ghazal' would become a regular feature on his programme.