News
Business
Movies
Sports
Cricket
Get Ahead
Money Tips
Shopping
Sign in  |  Create a Rediffmail account
Rediff.com  » News » Govt should be given time to restore normalcy in J-K: SC

Govt should be given time to restore normalcy in J-K: SC

The Supreme Court on Tuesday refused to interfere with the Centre and the Jammu and Kashmir government imposing restrictions, including shutdown of communication services, after the abrogation of Article 370 and said "reasonable time" should be given to authorities to ensure normalcy as the "situation is very sensitive". 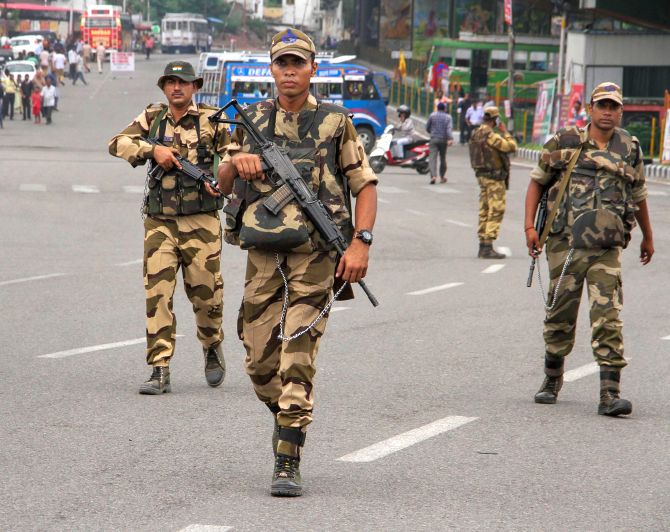 The apex court said it will have to wait for the "real picture" to emerge and look into "all the pros and cons" before going into the issues raised in the "poorly drafted" and "very carelessly filed" plea with perhaps the petitioner also not knowing the truth of the situation.

It took note of the Centre's stand that it was reviewing the situation in the region on a day-to-day basis as also the reports from district magistrates, and relaxations are being ordered accordingly.

"An individual has come to the court. The situation is very sensitive. Given the seriousness of the situation, the law and order restrictions have been imposed," said a bench, comprising Justices Arun Mishra, M R Shah and Ajay Rastogi.

The court also said that it is to be ensured that no life was lost there and posted the matter after two weeks, saying it will wait for normalcy to return.

"We are with you on the issue of right to liberty of the people. But we should have a real picture before us," the bench told senior advocate Maneka Guruswamy, arguing for Congress activist Tehseen Poonawalla, who has challenged the Centre's decision to impose restrictions and "other regressive measures" in Jammu and Kashmir following the revocation of the provisions of Article 370.

He sought withdrawal of 'curfew/restrictions', blocking of phone lines, the Internet and news channels.

His petition was opposed by Attorney General K K Venugopal and Solicitor General Tushar Mehta who said it has to be ensured that the transition takes place peacefully.

"We have to ensure that law and order situation in Jammu and Kashmir is maintained," Venugopal told the bench and referred to the July 2016 agitation in Kashmir after encounter of terrorist Burhan Wani and said it took around three months to bring normalcy at that time.

He said that since 1990, 44,000 people have been killed by extremists and people from across the border have been guiding and giving instructions to them and in the present situation, it will take few days to restore normalcy in Jammu and Kashmir.

Venugopal said not a single death has been reported since last Monday after the restrictions were imposed.

The Attorney General was responding to the bench which asked about the steps taken by the authorities for bringing normalcy and restoring basic facilities in the region.

During the hearing, the bench said: "The situation is such that nobody knows what exactly is happening there. Some time should be given for bringing normalcy. They are analysing the situation on a day-to-day basis.

"The government's endeavour is to restore normalcy. That is why they are reviewing the situation on a day-to-to basis. If tomorrow anything happens in Jammu and Kashmir, who will be responsible? Obviously the Centre."

The bench further said that it has to look into all the pros and cons and therefore reasonable time should be given to the government to ensure normalcy returns in the state and asked Guruswamy to give specific instances where relief is needed.

"You give us specific instances and we will give directions to them to provide relief," the bench said while asking the AG as to how much time will be needed to restore normalcy.

Venugopal replied there is a need to ensure that law and order situation is maintained and least inconvenience is caused to the general public in Jammu and Kashmir where large number of troops and para military forces have been sent.

While Guruswamy was making submissions that due to snapping of all type of communication people failed to speak to others on the festive occasion, the bench said, "nothing can be done overnight. There are serious issues. Normalcy would return and we expect it will come with time. What is important is it has to be ensured that no life is lost".

Venugopal said that the government is ensuring that no violence or human rights violations takes place there.

"It is in our best interest to lift the restrictions. We will relax conditions depending on situation on ground," he said, adding, "Wait for sometime. Let us wait for normalcy to return".

He said that during the agitation in July 2016, total of 47 persons had died but till today no one has died.

Guruswamy said how can there be total prohibition on communication that even soldiers posted in the state cannot talk to their family members.

This submission invited angry reaction from the bench, which said: "Why you are raising grievances on behalf of soldiers. Your prayer is not this. Soldiers have to maintain discipline and if they have any grievance then let them come before us. Why you are taking up the cause of soldiers."

When Guruswamy tried to make a reference of Article 370, the bench warned her saying, "Don't make any such statement on it".

She had said she was not making any comment on Article 370 but was on the issue of constitutional right of the individuals.