Gopal Kanda supports BJP, triggers row over his past

With six MLAs short of the number needed to form the next government, the Bharatiya Janata Party on Friday was promised 'unconditional support' by Haryana Lokhit Party leader Gopal Kanda, a controversial politician accused in a case of abetment to suicide. IMAGE: Gopal Kanda, the controversial Haryana MLA is back in the headlines after he won the Haryana election from Sirsa. Photograph: PTI Photo

Kanda told reporters that he and all independent candidates have 'decided' to extend unconditional support to the Bharatiya Janata Party. In Delhi, six MLAs met the party's working president J P Nadda.

The apparent BJP move to accept Kanda's support was slammed by the opposition Congress and BJP leader Uma Bharti, who recalled the row in which the politician was involved when as a minister in Haryana's Congress government in 2012.

In a tweet, the former Union minister cautioned her party that this could hurt the clean image enjoyed by Prime Minister Narendra Modi and Chief Minister Manohar Lal Khattar.

'I think you should look at the statements made by Narendra Modi and Amit Shah at the time when Gopal Kanda was a minister in the government in Haryana, when we forced him to resign after registration of a case and also removed him from ministership,' he told reporters in Delhi.

The BJP has emerged as the largest party with 40 seats in a hung assembly, beating the Congress which won 31 seats. Dushyant Chautala's Jannayak Janta Party has 10 MLAs and Indian National Lok Dal one.

The BJP is mainly counting on the support of Kanda, the lone MLA from his party, and seven independents to cross the majority mark in the 90-member House.

He was initially also booked for rape, but this charge was dropped when Delhi High Court granted him bail in 2014 in the abetment to suicide case.

In 2012, Kanda was Haryana's home minister in the Bhupinder Singh Hooda-led Congress government. He also held the urban bodies, industry and commerce portfolios.

"There is only one false case of 306 (Indian Penal Code section related to abetment to suicide) against me," he said.

"It is easy to make accusations," he said, trashing reports that he faced other cases as well. But in his election affidavit, Kanda has listed nine pending cases, including cheating, evading tax and bounced cheques.

Geetika Sharma, once employed with Kanda's then MDLR airlines, was found dead at her Ashok Vihar home in northwest Delhi on August 5, 2012.

In her August 4 suicide note, she said she was ending her life due to 'harassment' by Kanda and one of his employees. Kanda denied the charge.

He was booked by the Delhi police in the case, in which he is currently out on bail.

Kanda tendered his resignation when the row erupted. Then in the opposition in Haryana, the BJP had held protests against Kanda, demanding his arrest.

Kanda, who was earlier associated with the Indian National Lok Dal, fought as an independent and won the 2009 assembly polls after being denied a party ticket.

Later, he extended support to the Congress when it fell short of majority that year and was made a minister.

Kanda's rise is well known in his hometown Sirsa, where he began as a shoe shop owner. He later joined the realty business and then dabbled in the aviation sector.

Asked what made him and independent candidates extend support to the BJP, Kanda said, "We felt that under Prime Minister Narendra Modi's leadership, the country is progressing well and even the state government has delivered and provided a clean and transparent regime."

"So all independents talked yesterday and felt that the development work should continue, and therefore we decided to extend unconditional support to the BJP," he said.

Kanda said he and some other independents have talked to senior BJP leaders as well. He claimed that some top Congress leaders also approached them, "but we decided to support the BJP".

A senior Haryana BJP leader said four of the winners -- Balraj Kundu from Meham, Nayan Pal Rawat from Prithla, Sombir Sangwan from Dadri and Randhir Gollen from Pundri -- fought as Independents when they did not get BJP tickets.

Besides, two other independents Rakesh Daulatabad, Dharampal Gonder are said to have BJP leanings.

Ranjit Singh Chautala, a Congress rebel, has already announced his support to the BJP. 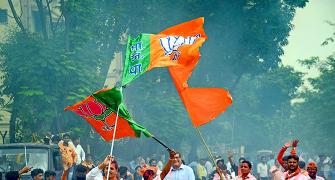 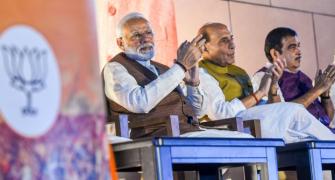