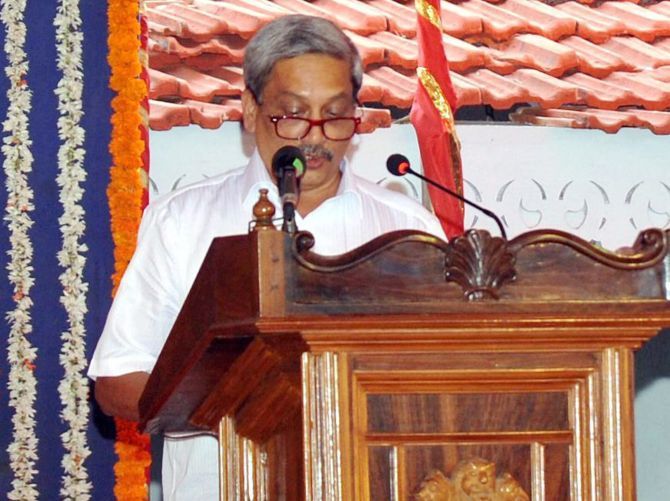 Manohar Parrikar, who quit as defence minister, was on Tuesday sworn in as chief minister of Goa to head a coalition government of local allies and Independents, three days after the Bharatiya Janata Party ended up second behind the Congress in a fractured mandate.

The decks for his swearing-in were cleared after a bench headed by Chief Justice J S Khehar refused to grant the stay on the Congress’ plea and ordered a floor test.

Parrikar returned to Goa as the chief minister for the fourth time, though he could not complete full terms in his earlier stints.

He had formally staked claim to form the coalition government on Sunday, following which he got an invite from Governor Mridula Sinha to prove majority in House.

At a function held at the Raj Bhavan, the governor administered the oath of office and secrecy to Parrikar along with nine MLAs including two members of the BJP, three of the Goa Forward Party, two of the Maharashtrawadi Gomantak Party and as many Independents.

They will be allotted ministerial portfolios after the floor test.

Prime Minister Narendra Modi extended his best wishes to Parrikar on becoming the chief minister of Goa and hoped that he will take the state to new heights of progress.

Parrikar said the regional parties have taken the lead to form this government and have requested him to head the dispensation by resigning as defence minister.

“My priority would be to retain speciality of Goa that is Goanness. The statement about the common minimum programme would be issued within a month,” he said.

The BJP leader, who is an Indian Institute of Technology-Bombay alumnus, said they have the support of 22 MLAs in total.

“There was a speculation for last two days whether the BJP really got the majority required to form the government and here we are, we have 22 legislators with us,” he said.

Among the allies who took oath along with Parrikar are Ramakrishna alias Sudin Dhavalikar and Manohar Asgaonkar (both MGP), Vijai Sardesai, Jayesh Salgaoncar and Vinod Palyekar (all GFP), and Independents Rohan Khaunte and Govind Gawade.

The two BJP MLAs who were sworn in are outgoing deputy chief minister Francis D’Souza and Pandurang Madkaikar.

BJP president Amit Shah along with Union ministers Venkaiah Naidu and Nitin Gadkari were present at the ceremony.

The council of ministers headed by Parrikar in Goa is a mix of youth and experience with strong representation from regional parties.

Among the nine ministers, two are from the BJP, three from the GFP, two from the MGP and as many Independents.

Veteran MGP leader Sudin Dhavalikar is a regional heavyweight. Sudin and his brother Dipak were ministers in the erstwhile Laxmikant Parsekar-led government but were dropped in December last following differences with the then CM.

MGP, which had a pre-poll alliance with the BJP during 2012 elections, severed its ties with the saffron outfit and contested the February 4 after joining hands with the Shiv Sena and newly launched Goa Suraksha Manch.

A four-time legislator, Dhavalikar was minister for public works department and transport in the previous BJP-led ruling coalition. He has held ministries earlier also.

Vijai Sardesai, a 46-year-old two-time legislator from Fatorda, was earlier in the Congress but quit the party in 2012 and successfully contested as an Independent.

Sardesai, a first time minister, mentored the GFP, which came into existence in January 2016 and won three seats in the just held assembly polls. Two of his candidates, Jayesh Salgaoncar and Vinod Palyekar, defeated BJP stalwarts.

BJP’s Francis D’Souza, who was deputy chief minister in the Parsekar cabinet, is back in the government. An old BJP hand, he is a five-time legislator from Mapusa. The 62-year-old has been the minority’s face of the BJP and commands respect across cadres.

Manohar Asgaonkar won from Pernem on a BJP ticket in 2002 but joined the Congress in 2007 and was re-elected.

However, he lost in the 2012 polls. Asgaonkar was listed to be Congress candidate from Pernem but switched over to the MGP and won the election.

Rohan Khaunte is one of the Independents inducted in the ministry. He has been elected twice from Porvorim.

In the just held polls, he won from Porvorim with the backing of the Congress. He first announced support to the Congress but later changed his stand and backed Parrikar.

Govind Gawade is the tribal face of the ministry. He won as an Independent from Priol defeating MGP stalwart Dipak Dhavalikar.

The tribal leader, a first-time MLA, was supported by the BJP, which didn’t field its candidate in the constituency. In the past, he played a key role in agitations demanding enforcement of rights of ST communities in Goa.

Jayesh Salgaoncar of the GFP made it to the House by defeating BJP heavyweight Dilip Parulekar, the tourism minister in the previous government, from Saligao. This was his first assembly election and now he has become a minister.

“Though the mandate was fractured, all the alliance partners have come together to take the number to 22 in the assembly.

“I agree that the mandate is fractured. But if every fraction of fractured mandate comes together we become 22. The lead for (effecting) the post-poll coalition was taken by the regional parties and not me,” he said replying to a query.

Parrikar said the Independent candidates and the local parties, who have extended support to the BJP-led government, had set a condition that ‘Prime Minister Narendra Modi should relieve me as defence minister and send me back to Goa as CM’.

He said the BJP’s alliance partners have taken this decision in the larger interest of Goa.

“Their support is only for the sake of Goa’s development and state’s speciality which is called as ‘goenkarponn’ (Goanness). I am very thankful to them for the support,” he said.

Meanwhile, a day after submitting a representation to the governor asking her to invite the party to form the government, the Goa Congress on Tuesday called on the governor with all its newly-elected 17 MLAs to seek an opportunity to prove majority in the assembly, but could not get any assurance from her.

The MLAs led by Congress Legislature Party leader Chandrakant Kavlekar held talks with the governor at Raj Bhavan for about half-an-hour arguing that being the single largest party, the Congress should have been called first to form the government.

“We requested the governor that the Congress be given an opportunity to form the government. Allowing Parrikar to be sworn in is against the Constitution. We have majority on our side,” Goa Congress Chief Luizinho Faleiro told reporters outside Raj Bhavan.

“The governor told us that she would take a decision as per her wisdom,” he said.

BJP in race to form government in Goa: Parrikar 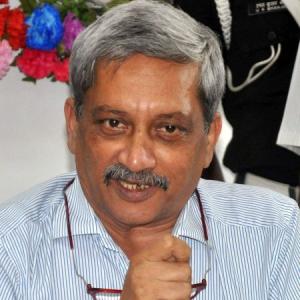