A group of five people, including candidates but excluding security personnel, is allowed to take part in door-to-door campaigning.

For roadshows, convoys of vehicles should be broken after every five vehicles instead of 10 (excluding security vehicles).

Public gatherings and rallies can be held subject to adherence to COVID-19 guidelines. 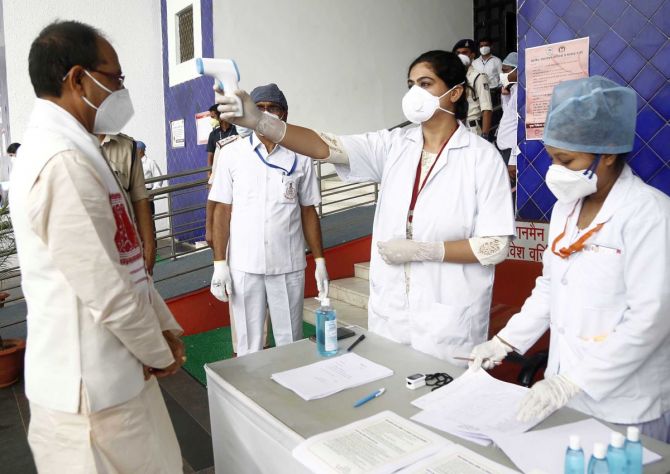 IMAGE: Madhya Pradesh chief minister Shivraj Singh Chouhan being checked by thermal screening as he arrives to cast his vote for the Rajya Sabha election in the state assembly in Bhopal in June. Photograph: ANI Photo

Voters will be provided gloves while using electronic voting machines and COVID-19 patients in quarantine will be allowed to vote at the last hour of the polling day, according to broad guidelines issued by the Election Commission on Friday for holding polls during the coronavirus pandemic.

A separate set of guidelines would be issued for voters who are residing in areas notified as "containment zone", the Election Commission said.

Here, those willing to use the facility have to fill up a form.

Officials then carry the ballot to the residence of such voters and videograph the voting to ensure transparency.

"COVID-19 patients who are quarantined will be allowed to cast their vote at the last hour of the poll day at their respective polling stations, under the supervision of health authorities... Sector magistrates shall coordinate this in their allocated polling stations," the guidelines said.

Bihar may become the first state to go for assembly elections amid the pandemic.

The polls are due in October-November.

Asked why the norms have no mention of "virtual" or "digital" campaigning, another official said the "broad guidelines have been framed based on COVID-19 guidelines issued by the health ministry and the home ministry to prevent the spread of the virus."

"Based on our guidelines, states will prepare their own set of three-layered comprehensive guidelines at the state, district and assembly constituency level. The state specific guidelines may talk of virtual campaign," he said.

The commission has recommended mandatory sanitisation of polling stations, preferably a day before the polls. Circles would be painted at polling stations to ensure social distancing.

"Hand gloves shall (apparently disposable in nature) be provided to the voter, for signing on the voter register and pressing button of electronic voting machine for voting," the document pointed out.

If the temperature of a voter is above the set norms of health ministry at first reading, then it will be checked twice and if it remains, then the elector shall be provided with a token or a certificate and will be asked to come for voting at the last hour of poll.

"At the last hour of poll, such electors shall be facilitated voting, strictly following COVID-19 related preventive measures," it said.

Face masks in reserve would be kept for those electors who are not carrying one.

During the process of identification of voter, the voters will require to lower the face mask for identification, according to the document.

In view of this, the state is already creating additional 34,000 (approximately) polling stations which is 45 per cent more, and will increase the total number of polling stations to around 1,06,000.

Another EC officer said indelible ink would be applied on voters' fingers as per norms. Sufficient number of hand sanitisers, soap and water would be made available to maintain hygiene he said.

Mask, sanitiser, face shield and gloves "shall be provided to every polling official and security personnel".

A group of five people, including candidates but excluding security personnel, is allowed to take part in door-to-door campaigning.

For roadshows, the commission said, convoys of vehicles should be broken after every five vehicles instead of 10 (excluding security vehicles).

Public gatherings and rallies can be held subject to adherence to COVID-19 guidelines.

The district election officer should identify in advance dedicated grounds for public gatherings with clearly marked entry and exit points.

In all such identified grounds, the district election officer should put markers in advance to ensure social distancing norms.

The district election officer and district superintendent of police should ensure that the number of attendees does not exceed the limit prescribed by the State Disaster Management Authority for public gatherings, the Commission said.

As an optional facility, nomination form will also be available online on the website of chief electoral officer and district election officer.

"Returning Officer should allot staggered time in advance to prospective candidates," as pr the guidelines.

Anybody violating instructions on COVID-19 measures will face legal action, it warned.

To ensure security personnel are not infected by the virus while performing duties, the number of vehicles to ferry them will be increased.

Several bypolls were recently postponed mainly due to coronavirus and rains.

No fresh schedule has been announced as yet. 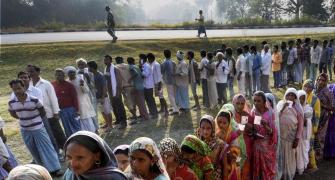 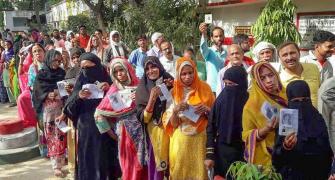 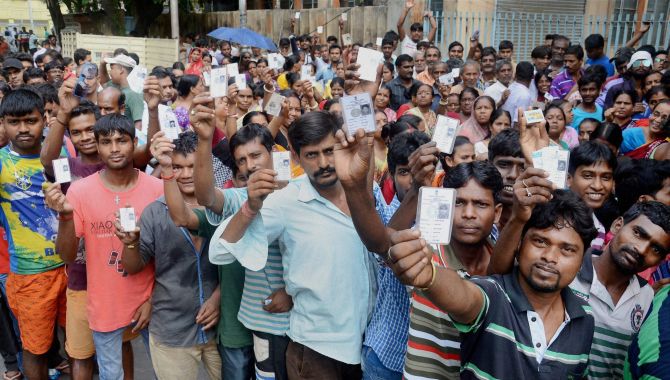 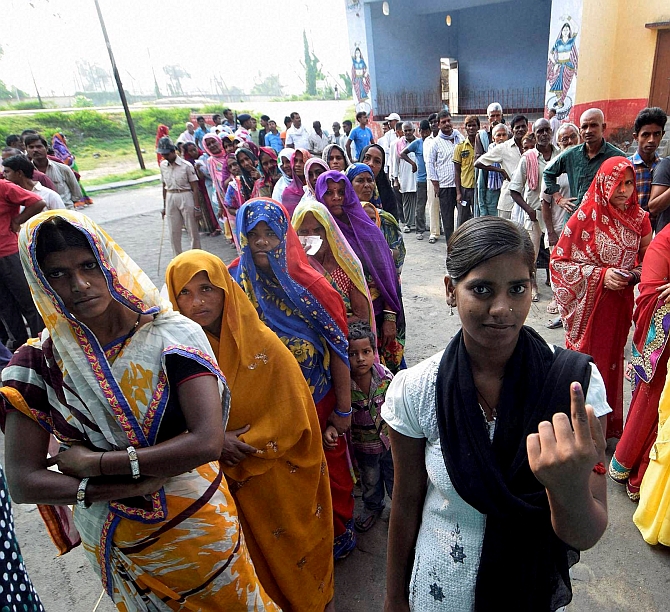