A Delhi court remanded suspected Indian Mujahideen terrorist Shahzad to seven days' police custody in a fresh case relating to the serial explosions in Delhi on September 13, 2008, amid indications that he is also to be quizzed about the recent Pune blast.

Police sources said accused Shahzad, who has absconded for over 15 months, would be taken to Maharashtra to probe his alleged connections with IM modules alleged to be involved in the Pune blast of February 13 which claimed 11 lives.

The Delhi Police special cell sleuths produced the accused before the court after completion of his 12 days' police remand. Chief Metropolitan Magistrate Kaveri Baweja allowed the the Special Cell to keep Shahzad, arrested from Uttar Pradesh on February 1, in their custody till February 25.

Public Prosecutor Rajiv Mohan sought 10 days' remand of the accused on the ground that he has to be interrogated in connection with the recovery of a laptop and two mobile phones from Azamgarh in Uttar Pradesh at his instance.

He is also to be interrogated with regard to whereabouts of 14 absconding IM members for their alleged role in the serial blasts in the national capital, Mohan said. Shahzad absconded with Junaid following an encounter with Delhi Police at Batla House in south Delhi on September 19, 2008, six days after the serial blasts. 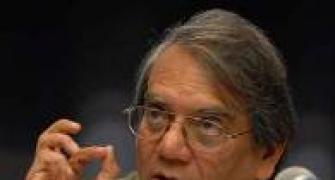