The Indian Air Force has carried out 24 sorties and air-dropped 4,000 kg of food packets in the flood affected regions of Assam and is keeping a close watch on the situation in the area.

"The Tezpur-based 115 Helicopter Unit of the Indian Air Force worked on relief and rescue mission in the flood affected areas. It undertook 24 sorties in Chetak and Cheetah helicopters in areas east of Tezpur and air-dropped nearly 4,000 kgs of food packets since Thursday," an official said.

A large number of the affected people have taken shelter in small patches of high ground, together with their cattle and livestock.

With water levels now receding, airdropping by helicopters in this sector has been currently put on hold. The pilots, however, remain on stand-by for any emergency situation, including evacuation of the marooned. 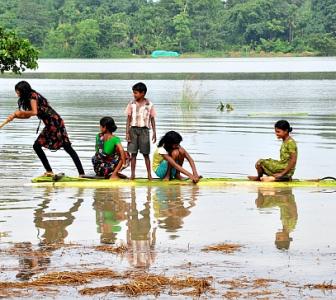