Former Bihar Director-General of Police Gupteswar Pandey, who was all over national TV for the last few months, joined the state's ruling Janata Dal-United on Sunday amid indications he would contest the assembly polls beginning next month. 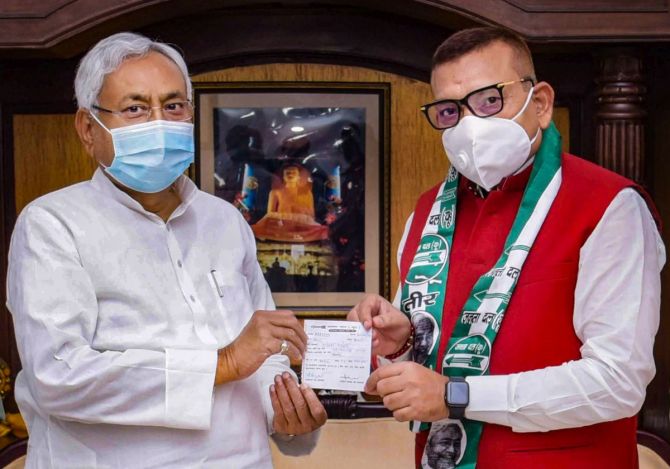 Pandey joined the party in the presence of Bihar chief minister Nitish Kumar, who is also the JD-U president, less than a week after taking voluntary retirement from service.

His much-anticipated induction took place a day after he met Kumar and insisted there was nothing poitical in their conversation.

The 1987 batch IPS officer had strongly defended Kumar on the issue of institution of a Central Bureau of Investigation probe into the mysterious death of Sushant Singh Rajput, the Patna-born talented filmstar.

The voluble officer had reminded actor Rhea Chakraborty, Rajput's girlfriend and the main accused in the abetment to suicide case being probed by the CBI, of her "auqat" (status) to question Nitish Kumar, whe she suggested that there was politics behind the Bihar government's decision to push for a CBI probe.

Pandey's application for VRS was accepted by Governor Fagu Chauhan on September 21, five months before the 1987 batch IPS officer was to superannuate, and in a rare gesture, a three-month cooling off period applicable to bureaucrats was waived in his case.

"I have a long, loving association with Nitish Kumar. He personally called me and offered party membership. I have a public profile and connect with people...people love me. But I don't know anything about politics. I will do what I am asked to do," he later told journalists.

Pandey also turned up at a press conference at the JD-U headquarters where he was welcomed into the party by Ashok Choudhary, a cabinet minister who was earlier in the day appointed the working president of the state unit.

Nitish Kumar's close aide Rajiv Ranjan Singh alias Lalan Singh, who has formerly been a state president of the JD-U and is currently the partys leader in the Lok Sabha, was also present.

One of the major achievements of Pandey, who has had an illustrious career, has been his ability to curb communal strife, said Singh.

Choudhary said, "We are glad that Pandey was given the party membership by our national president himself. He has been a people's man all through his career. We are confident that this trait of his will benefit the party."

When asked about his possibility of contesting the upcoming assembly polls, Pandey replied, "This is not a decision I have to take. I shall work as a disciplined soldier of the party. Whatever role the party leadership deems fit for me, I will be happy to play."

When reporters persisted with the query, Lalan Singh interjected, remarking in jocular vein he has not yet submitted his biodata. "Let him evince interest (in contesting the polls). Due consideration will be given".

Known for speaking his mind notwithstanding the constraints that came with the rules governing civil servants, Pandey was in the headlines while the governments of Maharashtra and Bihar were engaged in a tug of war over the investigation in Rajput's death case.

The Bihar DGP had publicly denounced the Mumbai municipal authorities for quarantining IPS officer Vinay Tiwari, who had landed in the western metropolis for heading the investigation after an FIR was lodged by Rajputs father, accusing Rhea Chakraborty and some others of abetting the actor's suicide.

Meanwhile, Pandey, who had famously resigned in 2009 to contest the Lok Sabha polls but returned to his job after his resignation was not accepted by the state government, got a thumbs up from the Bharatiya Janata Party.

Union minister Giriraj Singh told reporters in his Lok Sabha constituency Begusarai that Pandey has always been hugely popular with the masses.

"If he contests an election, he will win hands down, no matter whether he fights from Begusarai or anywhere else in Bihar, he said.

Pandey has spent a significant part of his career in districts like Begusarai and Muzaffarpur.

Sources in the JD-U, however, say he could be fielded from an assembly segment in Buxar, which has a sizeable population of Brahmins and is also the home district of Pandey.

Some media reports also claimed that he could be the JD-U's candidate for Valmiki Nagar Lok Sabha seat where by-election will be held following the death of sitting party MP Baidyanath Mahto.

However, NDA sources said Rashtriya Lok Samta Party chief Upendra Kushwaha, who is trying hard to regain entry into the BJP-led coalition, was also reportedly keen on contesting the seat which has a high concentration of Koeri voters. 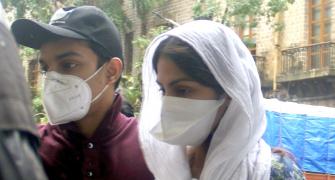 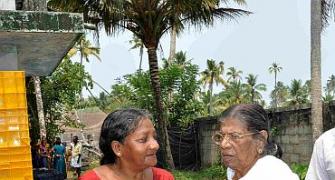 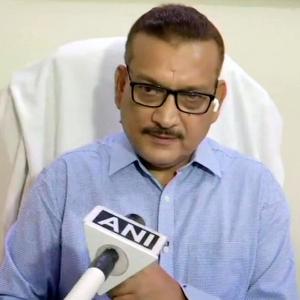