News
Business
Movies
Sports
Cricket
Get Ahead
Money Tips
Shopping
Sign in  |  Create a Rediffmail account
Rediff.com  » News » Why flyovers, subways are not a solution in Delhi

Why flyovers, subways are not a solution in Delhi 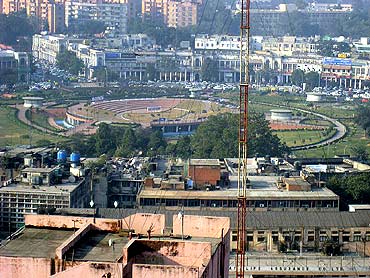 Citizens call for halt to subway construction in the heart of Delhi. Paranjoy Guha Thakurta and Jyotirmoy Chaudhuri report.

A group of eminent citizens including a consultant with a government urban planning agency has petitioned Delhi Lieutenant Governor Tejendra Khanna to immediately 'discontinue' the construction of eight new subways in Connaught Place (now known as Rajiv Gandhi Chowk), the shopping epicentre of the national capital, 'rather than continuing to make this very expensive and disastrous mistake.'

The new subways, to be built at a cost of around Rs 35 crore (Rs 350 million), will convert the outer circle of Connaught Place into a high-speed motorway. The project to construct the subways, approved by a technical committee of the Delhi Development Authority, was supposed to start in October 2009 and completed within a year in the time for the Commonwealth Games.

The subways were, however, not constructed on schedule and remained in limbo until recently when the New Delhi Municipal Corporation decided to resume the 'redevelopment' of CP.

What has dismayed the signatories to the petition to the LG is that eight new subways are being built despite the fact that the four existing subways in CP are in a state of filth, poorly lit and insecure, especially for women and the elderly.

What is not explicitly stated in the petition is that the new subways are being constructed because of the influence of a powerful lobby of contractors and their supporters in the NDMC.

The petition dated January 19, has been signed by, among others, Romi Roy, an urban planner advising the Unified Traffic and Transportation Infrastructure (Planning & Engineering) Centre, a traffic and transportation research body of the Delhi Development Authority; Anjlee Agarwal, executive director of Samarthyam, a civil society organisation engaged in research and technical assistance on accessible environments and Kalpana Viswanath, who advises the women's rights group Jagori on safe cities.

The petition can be found here.

The contentions made by these citizens in their petition are simple. An urban mobility system based on flyovers (there are already more than 30 flyovers in Delhi, and 40 more have been proposed), foot over-bridges and subways cuts off access to pedestrians, cyclists, aged people, women and persons with disabilities.

Instead of decongesting roads, flyovers, subways actually help clog up the traffic and transportation systems. Vehicles that have a free run, skipping several signals, eventually stop and queue up at a signal at the end of a series of flyways.

The resultant build-up of vehicles gives the impression of a traffic jam, particularly during peak traffic hours.

'This phenomenon can be seen on all signal-free junctions and corridors such as Ashram Chowk, Lajpat Nagar flyover, Nehru Place flyover, Outer Ring Road corridor, Ring Road, the DND Flyway connecting Delhi with NOIDA, Road No 56 (and the) Delhi-Faridabad Road,' the petition points out.

Lack of walking, cycling or rickshaw access, and longer circuitous routes force people to use cars. And, cars, which transport less than 15 per cent of Delhi's population choke most of the capital's roads. Besides, a system where pedestrians are pushed into subways and roads are freed for motorised traffic, leads to over-speeding and accidents that affect pedestrians and cyclists.

In the city of Ahmedabad that (like Delhi) has a 'bus rapid transit system', flyovers have been built for exclusive use by buses (unlike in Delhi).

Besides the issue of accessibility, the petition raises concerns about the safety of subways after dark.

An audit conducted by Jagori found Delhi's subways highly unsafe for women. In London, subways were filled up after urban planners realised that these provided shelter to drug peddlers and compromised the safety of women.

The petition suggests that safety can only be maximised in an 'active public space' with commercial facilities and such public space for citizens is better provided at ground level not underground.

People prefer to shop without the inconvenience of making journeys down and up subways. In addition, there are relatively high costs of maintaining subways. Lifts and escalators are often not used and subways do not help disabled people, women with young children and the elderly.

The National Urban Transport Policy of 2006 specifies that such categories of individuals should be given priority in the design of an area, 'bringing about a more equitable allocation of road space with people, rather than vehicles, as its main focus.'

The DDA's urban traffic planning arm, UTTIPEC, has accordingly re-oriented the principles of road and public space design in the city.

The petition to the LG points suggests that budgets 'be utilised for world-class carriageways, footpaths, cycle-tracks and... signalised crossings' (full or for 30-seconds thus maintaining cross-roads or what are called 'at-grade' intersections in technical parlance, which are ubiquitous crossings where motorists and pedestrians cross the ground at the same level, each taking turns for the other).

UTTIPEC's street design guidelines, approved under by a panel headed by the LG and supported by the Delhi trraffic police, envisage such an on-ground solutions, namely 20-second or 30-second signals with traffic 'calming' features even on corridors with high traffic volume corridors.

Such crossings are considered most convenient crossings for pedestrians, cyclists, aged people, women and persons with disabilities; and yet do not lead to queuing-up of motorised traffic.

Urban planners argue for designs which induce people to prefer using a public transport system instead of private transport. The pedestrian should be at the centre of urban planning and design initiatives.

A recent report of the Centre for Science & Environment, Mobility Crisis: Agenda for Action 2010, states: 'Walking is a crucial link to public transport. Pedestrian policies are even more important today when cities are planning massive augmentation of public transport. All public transport trips end and begin with walk trips.'

This is hardly the first time the LG is being petitioned on such issues. An earlier petition, dated September 23, 2009, was followed up by a meeting with in November 2009, where officials of UTTIPEC gave a presentation to the LG questioning the construction of subways when 'all major cities around the world have thoroughfare roads in the city centre where pedestrians and cyclists cross the roads at grade.'

At present, the outer circle of CP gets extremely congested during peak hours because of junctions being signal free and the small distances between two junctions During peak hours, due to 'three-directional weaving', traffic often comes to a virtual standstill.

Therefore, it is essential that directional signals are installed at each and every junction so that unidirectional traffic can move more smoothly. This automatically also provides safe crossings for all categories of people using various transportation modes.

The petitioners also suggest that 'private vehicles must be given close access to shopping areas' through a pricing mechanism (which essentially means differential parking fees) that ensures 'their short-term usage/frequent turnover' so that 'more visitors/shoppers can access Connaught Place utilising the same number of on-ground parking spaces in front of shops.'

They add that 'the task of city level mobility cannot be burdened on only one agency (the NDMC, in this case). City mobility is an issue to be addressed holistically...'

A static government and its bumbling ministers

How the State oppresses the 'little people'