Flood-prone states rapped for not enacting law on prevention

A standing parliamentary committee has rapped flood-prone states like Assam, Uttar Pradesh and Bihar for not taking any initiative to enact the model bill for flood plain zoning despite witnessing huge losses of human lives, cattle and properties during deluge. 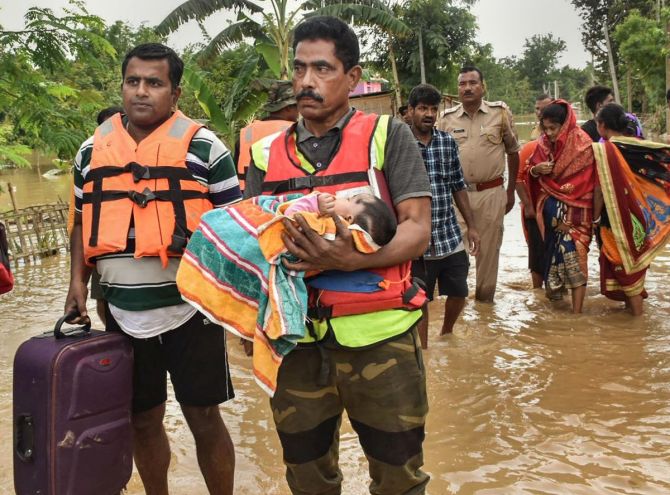 IMAGE: SDRF personnel rescue people from a flood-affected village, in Hojai district of Assam, on Thursday, May 19 2022. Photograph: PTI Photo

The standing committee on water resources, tabled in the Lok Sabha, said only Manipur, Rajasthan and Uttarakhand and erstwhile state of Jammu and Kashmir had enacted legislation, though delineation and demarcation of flood plains are yet to be undertaken.

Flood-plain zoning measures aim at demarcating zones or areas likely to be affected by floods of different magnitude or frequencies and probability levels, and specify the types of permissible developments in these zones, so that whenever floods actually occur, the damage can be minimised.

The committee noted that despite its benefits, floodplain zoning has not been earmarked/ demarcated in India and a model draft bill for flood plain zoning legislation was also circulated by the Union government to all the states.

"However, only the states of Manipur, Rajasthan and Uttarakhand and erstwhile State of Jammu and Kashmir had enacted legislation, though delineation and demarcation of flood plains is yet to be undertaken.

The committee said it is "dismayed" to find that the action taken reply of the department is silent as to whether or not the major flood prone states viz Uttar Pradesh, Bihar, West Bengal, Assam, Odisha etc, have taken any initiative/steps for enactment of the Model Bill for Flood Plain Zoning, as these states are witnessing huge losses in terms of human lives, cattle and properties, whenever the flood strikes.

The committee is of the view that merely issuing directions to states will not yield desired outcomes, unless protracted and vigorous efforts are made by the department to persuade and goad the states for enactment of the model bill.

They, therefore, reiterated their recommendation that the Union government should make renewed and concerted efforts for persuading the state governments for enactment of the Model Bill on Flood Plain Zoning and where necessary, states may consider suitably modifying the model bill and dovetail/customize it taking into account the socio-economic realities of the states.

"The committee was, therefore, of the opinion that the model bill must be suitably modified taking into account the socio-political and economic realities of the regions in which it is to be implemented. Further, the ministry of jal shakti should also consider providing financial assistance to those states that are willing to implement floodplain zoning," it said.

The committee further said it is not satisfied with the reply of the government as it merely states that the draft River Basin Management Bill, 2018 has been circulated among all states/Union territories and related Union ministries for comments/ suggestions and is presently in public domain and does not mention about the concrete steps that have been taken by the department to persuade the states to enact this important bill.

"The committee is of the view that given the importance of setting up river basin authority for each river basin of the country in order to ensure integrated operation of reservoirs, the committee reiterates their recommendation and urges upon the department to make concerted efforts to persuade states for enactment of the River Basin Management Bill," it said.

On floods in Assam, the committee expressed its deep anguish over the damage of property worth crores of rupees and loss of lives every year by the devastating floods in the state as well as the northeastern region every year.

The committee noted that the fury of floods in Assam and the northeastern region in the long term can be tackled by building storage reservoirs on rivers and their tributaries with adequate provisioning for flood cushion, integrated reservoir operation, interlinking of rivers etc.

However, these measures have many constraints such as topographic, geological, geographical, environmental, submergence, interstate and international issues.

Taking cognisance of the aforesaid facts, the committee said it believes that preparing and operating these long-term initiatives in a stand-alone manner may be difficult for individual states.

"Therefore, for integrated use of water resources, there is a need to move from the conventional, fragmented and localised approach to a comprehensive river basin approach. In order to provide coordinated river basin development including comprehensive flood control, it is necessary to set up river basin organisations, which would effectively provide immediate, short-term and long-term solutions in addition to the overall development of river basin," it said.

The committee, therefore, recommended that Ministry of Jal Shakti take concrete measures on priority basis to enact the River Basin Management Authority for holistic management of water resources of each river basin. 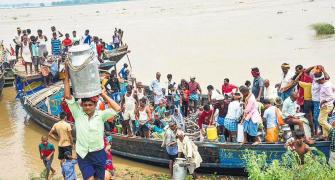 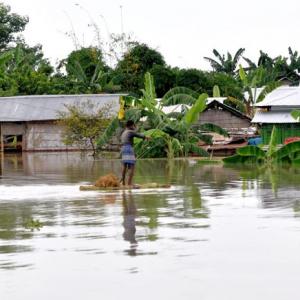 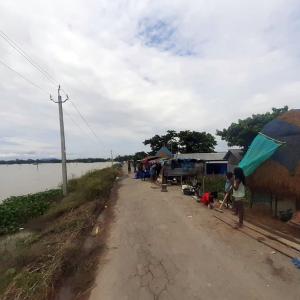