The Supreme Court has decided to hear the appeal proceedings against the 1993 Mumbai serial blasts convicts from January 11, 2011.

A bench of Justices P Sathasivam and B S Chauhan also issued notices to the convicts on the Central Bureau of Investigation's appeal seeking enhancement of punishment for them on Monday.

The bench, however, inquired from Solicitor General Gopal Subramanium as to why there was a delay of 880 days in filing the appeal for enhancement of punishment.

Admitting that there was considerable delay, Subramanium attributed the same to the voluminous 4,300-page judgment of the special Terrorist and Disruptive Activities (Prevention) Act court, which, he said, the prosecution had to minutely examine before filing the appeal.

The special TADA court had convicted 100 people in the Mumbai blasts case.

Among the convicts was Bollywood actor Sanjay Dutt, who was sentenced to six years in jail under the Arms Act but was exonerated for terror offences under the stringent TADA.

The CBI, which has prosecuted the case for around 14 years involving 123 accused, preferred not to appeal against the special court verdict, acquitting 50-year-old Dutt under the TADA.

The blasts had killed 257 people and left over 700 injured in the country's commercial capital.

Among the convicts, 12 were awarded death sentence and 20 got life imprisonment.

Those sent to gallows by TADA judge P D Kode included Yakub Memon, brother of prime absconding accused Tiger Memon, who along with underworld don Dawood Ibrahim and Mohammed Dossa were alleged to have hatched the conspiracy in Dubai to target Mumbai after communal riots ravaged the city in January 1993.

After the convictions were challenged, the apex court stayed the execution of death sentences.

The agency has also filed appeals in the case of two women accused. It has sought enhancement of punishment of Zaibunnisa Kazi, convicted under the TADA for keeping arms delivered to her by Abu Salem after visiting Dutt, besides challenging the acquittal of Rukshana Zariwala.
Source: PTI© Copyright 2021 PTI. All rights reserved. Republication or redistribution of PTI content, including by framing or similar means, is expressly prohibited without the prior written consent.
Related News: TADA, Central Bureau of Investigation, Mohammad Iqbal Mohammad Yusuf Shaikh, Gopal Subramanium, Firoz Amani Malik
SHARE THIS STORY
Print this article
Encounter: Shah to appear before CBI on Friday
What CBI chargesheet against Amit Shah says 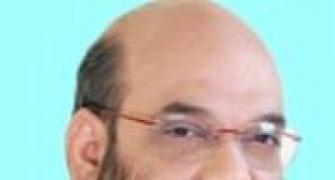