Nearly 200 students from the Indian Institute of Technology - Delhi waved placards with this slogan as they participated in a rally against corruption on Sunday. They were among the thousand others who took to Delhi's streets on Sunday to demand an anti-graft law.

"We want the Lokpal Bill as there is just too much corruption. This is an issue we feel strongly about. We hear so many horror stories about so much money being dwindled away. No political party is free from corruption. That is why this rally, which is a genuine mass rally, is so important," said Jitender Kumar, a second year student of Mechanical engineering in IIT.
Kumar had designed the above slogan and waved it proudly as speakers on the podium spoke against rampant corruption.
A final year student of MA in Jawaharlal Nehru University, Snigdha Pathak, displayed her placard proudly which read, 'Do not keep anything under the table, except your shoes'.

"We all came to know about the rally from Facebook and felt we should be a part of it. These politicians are stealing our county's wealth and if we, the people, don't show our anger, they will continue depleting our resources," Pathak said.
There were nearly 150 other students from JNU, who held placards which read 'Black money is financial terrorism' or fictionally attributed Mahatma Gandhi as saying 'I fought for India's freedom from the British, wont you fight for India's freedom from corruption'.

On the 63rd death anniversary of Mahatma Gandhi, nearly 5,000 people from all walks of life took to the streets in central Delhi. They gathered at the Ram Lila Ground at 2 pm and walked all the way till Jantar Mantar, shouting slogans like "Ek, do, teen, char, khatam karo brashtachaar (Put an end to corruption)."

There were villagers in traditional dhoti kurta and saris, businessmen in suits and young people in t-shirts and jeans.
Shiv Charan, a farmer from Surajkund in Faridabad, said, "We came to know about this rally from our village pradhan. Some of us sat together and decided to be a part of this as corruption is becoming an everyday occurrence now. We hired public buses to attend this rally and nearly 250 villagers are here, including women and children. It feels great to be a part of such a cause. There are no sweet-talking politicians here."

The proposed bill, which was distributed as pamphlets at Jantar Mantar, demanded that the proposed Lokpal will address every corruption related complaint within six months to one year. Within the next year, the accused officer or leader should be brought to the book.

It also demanded that the Lokpal need not take permission from any authority to start an investigation against a judge. To make the processes transparent, the records available with the Lokpal should be accessible to the public and the body will not be under the jurisdiction of the government, proposed the bill.

"This bill has been prepared by the public. It is not for or against a political party. The Lokpal Bill is so effective that it will eradicate corruption in the next three years. The Lokpal Bill suggested by the government is just a showpiece. This Lokpal Bill, which truly represents the public, should be passed in Parliament and our MPs, no matter which party they belong to, should support it," Shanti Bhushan said.

"This is just the beginning. We, the public, should show the government that corruption will not be tolerated under any circumstances. It is not necessary that the public should respond only when rallies are called by a political party. They should come out on the streets if the cause is genuine. Next time we meet, there should be even more people, so that the government knows what the people are thinking about them," Kiran Bedi told rediff.com. 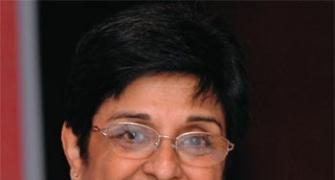 Kiran Bedi on fighting the Maoists