A day after eight SIMI activists were killed in an alleged police encounter following a daring prison break in Bhopal, their families have decided to approach the Madhya Pradesh high court seeking a CBI probe into what they dubbed as "cold-blooded murders".

"The families of the deceased have come to me and are weeping inconsolably for justice. We are going to move the MP high court for a CBI probe into the entire incident," lawyer Parvez Alam told PTI.

"It is surprising that the authorities are claiming that the accused climbed the 32 feet boundary wall of the jail. Is this possible?" he asked.

The police has claimed that the accused from the banned outfit were killed in an encounter on Monday hours after they escaped from the high-security Central jail where they had slit the throat of a security guard and scaled the wall using bedsheets, between 2 am and 3 am.

Alam described the encounter as "fake" and said, "The TV grabs show police and ATS firing. There is no evidence that the accused fired."

"This is a fake encounter and (these are) cold-blooded murders," Alam claimed.

He said Inspector General Yogesh Choudhary had last night told the media that the accused made keys to open their lock-up with toothbrushes.

"Can someone open the keys of high security Bhopal Central Jail, that has earned an ISO certificate, with keys made of tooth brushes?" he wondered. "What lies are these authorities speaking?"

"Our first course of action after the funeral of the accused killed in the encounter is to move the HC for justice," he added.

The kin of the seven accused have already reached Bhopal to receive their bodies and take them to their native place for burial, Alam said.

He said that no one has yet claimed the body of Mohammad Khalid, a resident of Solapur in Maharashtra.

Family members of accused Sheikh Mujeeb are taking his body to Ahmedabad, while Abdul Majid's body is being taken to Mahidpur area in Ujjain district of MP, he said.

The bodies of the rest -- Amjad Khan, Zakir Hussain, Mohammad Salik, Sheikh Mehboob and Aqueel Khilji -- all hailing from MP's Khandwa district, are being taken to their homes, Alam added.

Image: A screen-grab of the video aired by television channels that shows a security personnel firing at a dead SIMI suspect. 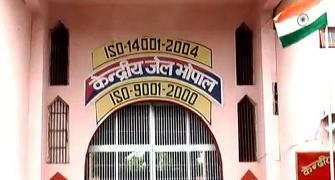 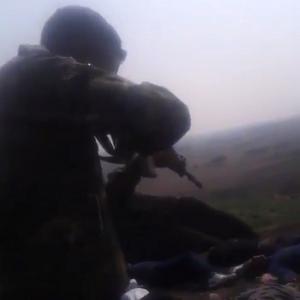