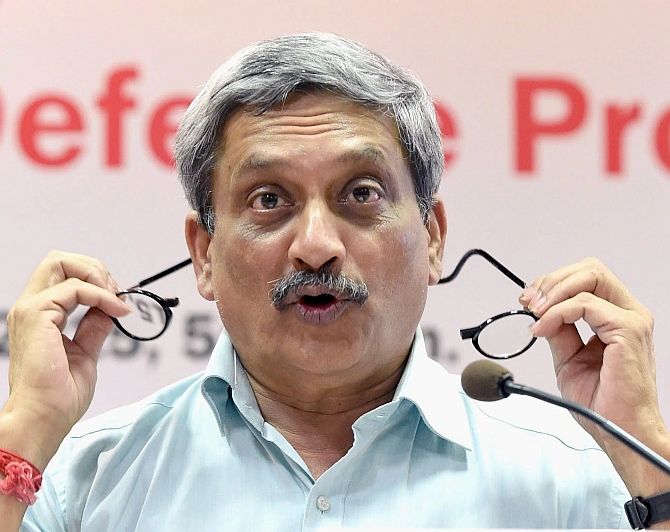 With just 13 MLAs in its kitty, the Bharatiya Janata Party in Goa is gearing up to form the next government with support from the Goa Forward Party, the Maharashtrawadi Gomantak Party and three Independent MLAs, several MLAs involved with the move told Rediff.com over the telephone from Goa.

The GFP and MGP, which, ironically, fought against the BJP and defeated some of its outgoing ministers, are likely to extend their support to the BJP to help it cross the halfway mark in the Goa assembly.

Govind Gawde, an Independent MLA from Goa's Priol constituency confirmed to Rediff.com that Union Defence Minister Manohar Parrikar has agreed to become chief minister, even as the chorus to bring Parrikar back as CM grows among the 13 BJP legislators, as well as the MGP.

The MGP with three MLAs, two of whom, Manohar Asgaonkar and Dipak Pauskar, won the Pernem and Sanvordem seats by defeating BJP minister Rajendra Arlekar and BJP sitting MLA Ganesh Gaonkar, respectively, fought against the BJP, but supportS the party now to form the next government "for the benefit and development of Goa," MGP President Dipak Dhavalikar said.

"I met him yesterday (March 11). Today (March 12) also I had a dialogue with him and he said that he is going to become the chief minister of Goa," Gawde said.

Interestingly, the GFP, with three MLAs, is yet to come out openly in support of the BJP or Manohar Parrikar.

While efforts to reach out to the three GFP MLAs -- Vijai Sardesai (Fatorda), Vinod Paliencar (Siolim) and Jayesh Salgaonkar (Saligao) -- did not elicit much response.

Both Sardesai and Paliencar refused to commit or deny their support to the BJP before hanging up and switching off their phones.

GFP President Prabhakar Timble has reportedly said that his party has not yet decided to go with the BJP in forming the next Goa government.

Dr Pramod Sawant, the BJP MLA from Saligaon, told Rediff.com that both the MGP, GFP and three Independents have agreed to support the BJP.

"The BJP is forming the next government," Dr Sawant said over the phone.

"Both MGP and GFP and three Independent MLAs are also supporting us."

"The third MLA is being finalised, but with the help of even two Independents we reach the figure of 21 with three MLAs each from the MGP and GFP," Dr Sawant, one of the three BJP legislators in the vanguard of the movement to bring back Parrikar back to Goa, said.

When asked to confirm Gawde's claim that he spoke to the defence minister and the latter agreed to come back to Goa as chief minister, Dr Sawant said, "In that case he will surely come."

Dipak Dhavalikar, the MGP president who lost the Priol seat to Gawde, said, "We will support the BJP form a government only if Manohar Parrikar comes back to Goa."

"Without Parrikar a BJP government is not possible in Goa," he warned.

At the time of speaking with this correspondent MGP MLA Sudin Dhavalikar, who won Goa's Madkai seat, was meeting state Governor Mridula Sinha with a letter of support to the BJP.

"Sudin is meeting the governor right now with a letter of support in favour of the BJP," MGP President Dhavalikar said. 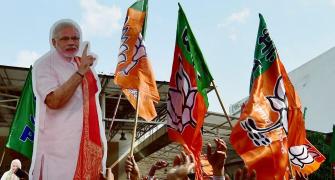