A US-based businessman has claimed that he has "crystal clear" evidence to back his claim that he acted as an intermediary between President Asif Ali Zardari and the US administration to avert a military coup in wake of the unilateral US raid that killed Osama bin Laden.

Mansoor Ijaz's comments came after Pakistan government rejected his claims that detailed his role in Zardari's efforts to reach out to the Obama administration to ask it to stop army chief Gen Ashfaq Parvez Kayani from staging a coup following the May 2 Abbottabad raid, in an article in the Financial Times on October 10.

Though the article created a flutter in Pakistani political circles, the government maintained silence on it for over two weeks.

Ijaz responded to the denials on Sunday in a statement issued from Zurich, saying he had proof to back up his claim.

"I have the facts -- all the facts. Every word I say or write is backed with hard evidence and proof. Challenging me on that would be a grave mistake," he said.

Ijaz reminded the foreign office, presidential spokesperson Babar and Zardari that "the facts I have are irrefutable."

He added: "The evidence is crystal clear."

Ijaz said in his statement on the denial: "This is a dangerous path for President Zardari and his staff to follow because the truth is incongruent with the statements his office is issuing to the Pakistani public."

Ijaz reiterated his contention that he had acted as a "private channel" to communicate sensitive information to Admiral Mike Mullen, then chairman of the US Joint Chiefs of Staff.

"The information, sent in the form of a confidential memorandum, was dictated to me and approved for transmission in its final form by a senior Pakistani government official with close ties to President Asif Ali Zardari."

He said he had "refrained from publicly confirming, denying or engaging in any of the rife speculation surrounding who did what, when in the issuance of the memorandum or what it specifically contained as important offers to the US government at a moment of great strain in the bilateral relationship after Osama bin Laden had been found and killed on Pakistani soil."

Ijaz added he would continue to refrain from commenting on the contents of the memorandum "because I have no role in Pakistan's political affairs."

He said, "And while I do not wish to be dragged into the cesspool of Pakistan's politics, the government should take great care in its public statements on the subject of the memorandum or my role in bringing it to US government officials they themselves asked me to see it got to."

He said the time had come for Pakistan's leaders to stop "telling lies" and get back to the "business of governing for the betterment of their people rather than wasting time, energy and much-needed resources in the useless bickering and back-biting that defines today's debate over the nation's affairs."

Presidential spokesman Babar had contended that Ijaz's allegations were "nothing more than a desperate bid by an individual...to seek media attention through concocted stories."

The foreign office had said the article in the Financial Times "was a total fabrication and the subsequent comments unwarranted, speculative and unnecessary."

It said in a statement: "The idea of employing a private individual to convey a message to a foreign government, circumventing established official channels of communication, defies belief."

Source: PTI© Copyright 2021 PTI. All rights reserved. Republication or redistribution of PTI content, including by framing or similar means, is expressly prohibited without the prior written consent.
Related News: Asif Ali Zardari, Mansoor Ijaz, Farhatullah Babar, Osama bin Laden, US Joint Chiefs of Staff
Print this article
War of words with US over Haqqani making Pak uncomfortable
A new phase in India-Afghan ties 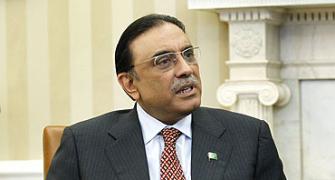 War of words with US over Haqqani making Pak uncomfortable