Three terrorists of Pakistan-based Jaish-e-Mohammad outfit were on Saturday killed in an encounter with security forces in a forest area of Tral in Pulwama district of south Kashmir, a police official said.

While two of the terrorists were killed on Saturday morning, another took shelter inside a cave and was finally killed after several hours of gunbattle in Tral, about 36 km from Srinagar, the official said.

He said bodies of all the three terrorists and their weapons were recovered from the scene of the gunbattle which started early on Saturday morning when security forces launched a
cordon-and-search operation after receiving an information about presence of terrorists there.

He said though the identity of the deceased terrorists was being ascertained, they belonged to JeM outfit.

"The killing of the terrorists is a major setback for the outfit which is trying to revive its activities in the valley," the official said.

He said security forces faced stone-pelting during the operation but exercised maximum restraint while dealing with it.

Some people indulged in stone-pelting and tried to march towards the encounter scene to help the militants escape but were chased away by the security forces, the official said, adding there was no report of any casualty among the civilians.

A Central Reserve Police Force officer was injured on Saturday when terrorists carried out a grenade attack in Kulgam district of south Kashmir, a police official said.

Unidentified terrorists hurled a grenade at a patrolling party of the CRPF in the main town of Kulgam, about 70 km from Srinagar, the official said.

The whole area was immediately cordoned off and a hunt was launched to nab the attackers, the official said.

The injured officer was shifted to a hospital. No outfit has so far claimed responsibility for the incident. 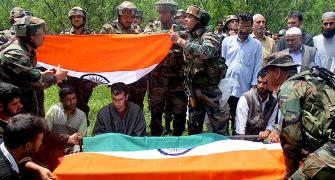