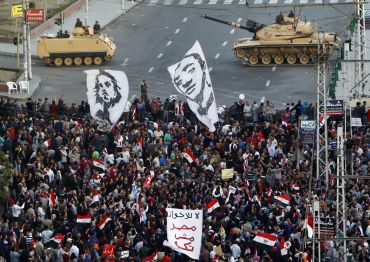 Thousands of angry Egyptian opposition protesters broke through an army barricade to march on the presidential palace on Friday, demanding Islamist President Mohamed Mursi to call off a controversial constitutional referendum that sparked the worst violence since he assumed power in June.

Soldiers, however, prevented the protesters from nearing the presidential palace's main gate.

Protesters have been arriving in the iconic Tahrir Square since early morning to prepare for mass rallies against Mursi, demanding that the President must roll back his edict granting himself expanded powers and must postpone the scheduled December 15 referendum on constitution.

They say the new draft constitution does not adequately represent or protect all Egyptians.

Egypt's main opposition coalition, the National Salvation Front, said it would not take part in the dialogue proposed by Mursi on Thursday night, a senior member of the group said.

The demonstrators from venues around Cairo including Giza, Tahrir Square, Abbaseya and a number of mosques converged on the Presidential Palace in Heliopolis, where tanks and armoured cars were positioned to keep protesters at bay.

The areas around the presidential palace witnessed violent clashes between anti and pro-Mursi supporters in the past two days that left seven people dead and nearly 700 injured.

Muslim Brotherhood Mohamed Badie preached the sermon in Al-Azhar mosque today during the funeral of people who were killed clashes in front of the presidential palace.

Following the prayers the people attending the payers took to the street chanting "Egypt is Islamic Islamic" which caused immediate panic on social media.

Hundreds of protesters have been holding a sit-in in Tahrir Square since November 22 when Mursi's constitutional declaration rendered his decisions above judicial challenge and made the Islamist-dominated Shura Council and Constituent Assembly immune from dissolution by court order.

Earlier, supporters of Mursi held their own march in Cairo.

Addressing the nation in a live televised speech Thursday night, Mursi refused to withdraw the controversial edict he issued and vowed to go ahead with a referendum on the new constitution on December 15.

Mursi said he respects peaceful opposition to his decisions but will not tolerate violence.

He condemned those involved in the clashes  referring specifically to those with weapons and who are backed by members of the "corrupt ... ex-regime" -- and promised they'd be held accountable.

"(They) will not escape punishment," the president said.

In his speech, Mursi said more than 80 people had been arrested after days of violent protests.

He offered to hold dialogue with the opposition and to meet their representatives on Saturday in his office.

Police also fired tear gas to disperse hundreds of protesters gathered outside the president's house in his hometown of Zagazig, north of Cairo.

The Islamist group said on its website and Twitter that the building had come under "a terrorist attack," with hundreds surrounding it -- though there was no sign of a fire or significant damage.

On Twitter, the Brotherhood has said it will hold opposition figures "fully responsible for escalation of violence and inciting their supporters."

Clashes erupted in the coastal city of Alexandria between pro- and anti-Mursi protesters following Friday prayers there.

Security was beefed up around the media city close to Cairo after hardline Salafis called on their supporters to siege the city which hosts studios for private TV stations.

Meanwhile, Ahram Online reported quoting Justice Minister Ahmed Mekki that the president may delay the referendum, if the opposition accepts dialogue without preconditions.

"The president is ready to talk with political figures without any preconditions. He is open to the idea of postponing the referendum to reach consensus over the contentious articles," Mekki said.

According to the website, Head of the Supreme Electoral Commission Samir Abu El-Maati confirmed that the expatriate voting on the constitution referendum has been postponed from Saturday to Wednesday (December 12).

One army officer outside the presidential palace addressed protesters through a speaker, saying, "We are here to protect the legitimacy represented by you. We don't carry weapons or sticks.'

Other officers went into the crowd trying to convince them to move back.

Some Brotherhood members and opposition protesters clashed outside of the FJP headquarters in Koum Hamada City, Beheira Governorate, after an opposition March headed there.

In Gharbiya, a number of protesters blocked the railway in Mahalla City and prevented trains between Tanta and Mansoura from passing.

Adel Saeed, a spokesman for Egypt's newly appointed general prosecutor, said that Hamdeen Sabahi, Mohamed ElBaradei and Amr Moussa are being investigated for allegedly "conspiring to topple" the government.

But an opposition spokesman said the president had missed a historic chance for compromise.

"We had hoped that the president would answer the continuing calls to rescind the constitutional decree and delay the referendum until there's national consensus on the constitution," he said in a televised address.

"We had wanted the president to have a comprehensive dialogue to save the country from the split that threatens it."

The National Salvation Front said Mursi's speech "went against the repeated appeals to him to offer consensus solutions... to lift Egypt out of its current disastrous situation."

The opposition accused Mursi of consolidating power for himself and the Muslim Brotherhood, in part by having an Islamist-dominated group push through the draft constitution.

Four Mursi advisers have resigned over the crisis.

He welcomed Mursi's call for talks, but stressed they should be "without preconditions", a statement said.

The November 22 edict by Mursi, in which he made his decisions immune to judicial oversight until a new constitution is voted upon, set off the latest wave of political unrest.

Image: Anti-Mursi demonstrators stage a protest outside the presidential palace in Cairo on Friday 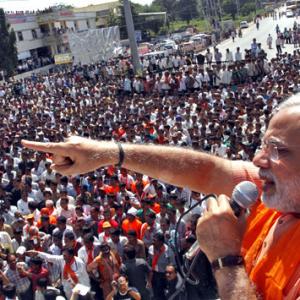 Why Modi will never be Vajpayee for the Muslims