Brushing aside the Centre's reservations, Dravida Munnetra Kazhagam chief M Karunanidhi on Sunday declared that he will strive for a separate Eelam. He also endorsed the move for applying pressure on the government for the protection of the Tamil community's rights in Sri Lanka by moving the United Nations.

In his address at DMK's Tamil Eelam Supporters' Organisation conference in Chennai, Karunanidhi described the birth of a separate homeland for Lankan Tamils as his "unfulfilled dream," asserting he will continue to pursue it with the help of other stake-holders.

"Let us first apply medicine to those who are injured and we have started doing that with TESO Conference. Like I have often said, there is my unfulfilled dream (of Eelam coming into existence.) But I will continue to struggle towards realising that dream, taking you all on board," he said.

Karunanidhi's remarks come against the backdrop of the Centre expressing reservations in the Madras high court over using the term Eelam. It later stated that that it had no objection to Eelam being used in the conference title.

The Centre had asked the organisers to ensure that the meet does not issue any declaration or outcome calling into question the sovereignty, territorial integrity and unity of any foreign country, with whom India has diplomatic relations.

Referring to a resolution passed at the TESO conference, which called for India to move a resolution in the UN for bestowing full rights to the Tamil community in Sri Lanka, he said, "We need not exert any more pressure other than this."

"This resolution can be used to exert pressure (on the government)," he said in his concluding remarks.

On the Eelam issue, he said the immediate job on hand was to apply first-aid on "life threatening wounds" of the Sri Lankan Tamils with a view to save their lives.

He recalled that TESO was founded in the 1980s and political veterans such as Atal Bihari Vajpayee and N T Ramarao had attended a meeting of the organisation in Madurai in 1986 to extend their support for the Sri Lankan Tamils' cause. 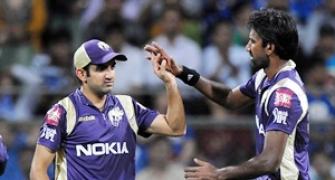 'Stint with KKR has helped in my national comeback'