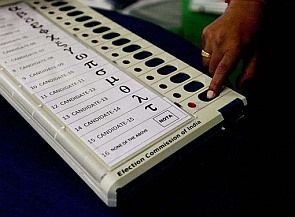 The Election Commission wants to use a new machine to enhance secrecy of votes during counting which prevents disclosure of voting pattern.

The Election Commission has moved the law ministry with a proposal for introduction of 'Totaliser' machine for counting of votes.

The poll panel is of the view that by use of 'Totaliser', a further level of secrecy in voting and the mixing of votes at the time of counting will be achieved, which will prevent the disclosure of pattern of voting at a particular polling station.

The law ministry is the administrative ministry for the poll body.

But the government has not taken a considered view on introduction of the machine.

"Secrecy of votes being the essence of Indian democracy will certainly be ascertained before introduction of any technological advancement in the voting or counting," Law Minister Ravi Shankar Prasad had said last week, responding to a question in the Rajya Sabha.

The EC has also sent a proposal for procurement of control units and ballot units.

EVM system consists of a maximum of four balloting units and one control unit. The two are connected by a cable.

Instead of issuing a ballot paper, the polling officer in-charge of the control unit will press the ballot button. This will enable the voter to cast his vote by pressing the blue button on the balloting unit against the candidate and symbol of his choice.

As the procurement requires investment, the law ministry will seek the approval of the Union Cabinet.

The EVMs have a life span of 15 years and the ageing machines are replaced following due procedure.