The Election Commission on Wednesday rejected the demand of 22 political parties to count paper trail machine slips before the counting of votes polled in electronic voting machines (EVMs), saying it has not been found 'feasible'. A day after a delegation met the EC, it issued a statement, saying after two rounds of in-depth discussions on Wednesday and Thursday, 'it has neither been found possible nor feasible to accede to this demand' in the overall context and especially in view of a Supreme Court judgment of April 8 which had directed the poll panel that the random selection of VVPATs will be subject to the process of slip verification as per the EVM guideline in force.

The guideline broadly states that the slip count should be held at the end of counting of votes polled in EVMs.

Ahead of counting of votes for the Lok Sabha election, opposition parties Wednesday slammed the EC for rejecting their demand to tweak the counting of voter-verifiable paper audit trail (VVPAT) slips, with the Congress calling it an 'Enfeebled Commission' while Bharatiya Janata Party president Amit Shah terming their plea as 'unconstitutional'.

"There were some other procedural issues like allowing counting agents of candidates along with all returning officers and assistant returning officers on which necessary instructions have already been reiterated and wherever required made more candidate-friendly," the EC said in a statement.

The opposition parties, which had approached the EC on Tuesday, wanted five random VVPATs to be counted first so that if there is a problem or a mismatch, the entire VVPAT slips can be counted at the beginning itself.

Though the EC had made it clear to the parties on Tuesday that the old protocol would continue, its top officials met Wednesday and decided to continue with counting the slips at the end.

As per procedure, postal ballots so far were the first to be counted.

The number of service voters stands at 18 lakh and these include personnel of the armed forces, central police force personnel and state police personnel who are posted outside their constituencies.

Out of the 18 lakh registered voters, 16.49 lakh have sent their postal ballots to their respective returning officers as on May 17.

The exercise of counting postal ballots manually will itself take a couple of hours at least, an EC official said.

"We don't want to hurry up, but at the same time we do not want to slow down the counting either keeping in mind the number of such ballots received. Therefore, the postal ballot count could continue simultaneously with EVM result count," an official said.

"If the process has been so long drawn for the sake of integrity of the electoral process, why is (the) EC not adhering to the basic principle of testing the sample first?" the Left leader asked.

Congress spokesperson Abhishek Singhvi asked whether the EC has made the EVMs 'electronic victory machines' for the BJP and the model code of conduct as 'Modi's Campaign Code', alleging it has succumbed to the pressures of Prime Minister Narendra Modi and BJP chief Amit Shah.

"It is a black day for democracy and it is very sad and unfortunate for an institution like the Election Commission," he told reporters.

The Telugu Desam Party termed the EC decision as 'a dark day for Indian democracy'.

'A genuine and fair demand for transparency is chucked out of the window without a reason.

But Shah accused the Opposition of 'disrespecting' people's mandate by raising doubts on the EVMs and said it is 'tarnishing' Indian democracy as it is rattled by its 'likely defeat' in the Lok Sabha elections.

Slamming the opposition parties, he said in tweets that they started protesting against EVMs only after the sixth of the seven-phase polling and intensified it after exit polls.

"How can you question EVMs credibility on the basis of exit polls?" he asked.

He termed as unconstitutional the demand of the opposition parties that the EC change its counting protocol and count five random VVPATs first, saying any decision in this regard is not possible without an all-party consensus.

Shah said the Supreme Court has given a final shape to electoral process by hearing three PILs and asked if the opposition is raising questions on the apex court.

Union Minister and BJP ally Ram Vilas Paswan called the opposition 'sore losers' and claimed that their 'desperation' over the VVPAT issue was an indication of their defeat in the elections.

The ruling Telangana Rashtra Samiti in Telangana said it does not have doubts about the genuineness of the election results using EVMs with VVPATs.

"We don't have that kind of doubt. Earlier, we had raised some doubts. But it was clarified time and again and proved right by the EC, whatever their version. After that, we are convinced," TRS MLC Palla Rajeshwara Reddy told PTI in Hyderabad.

Source: PTI© Copyright 2020 PTI. All rights reserved. Republication or redistribution of PTI content, including by framing or similar means, is expressly prohibited without the prior written consent.
Related News: VVPAT, Election Commission
SHARE THIS STORY
Print this article 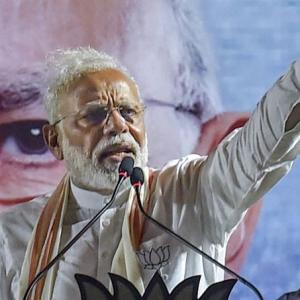