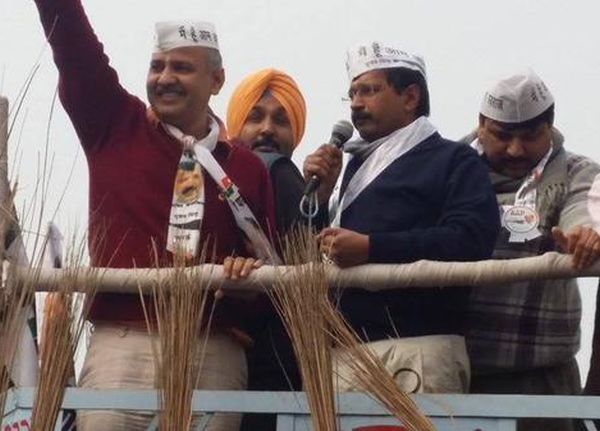 Cracking the whip, the Election Commission has censured Delhi Chief Minister Arvind Kejriwal for his bribe remarks made at a poll rally in Goa and said if he continues to violate the model code, stern action would be taken against him and his party, including suspension or withdrawal of recognition to the Aam Aadmi Party.

‘...The Election Commission hereby censures you for violating...provisions of MCC (Model Code of Conduct) and expects that you shall be more circumspect in your public utterances during election time.

‘You may also note that in case of similar violation of MCC in future, the Commission shall take stern action against you and your party, using all powers available to it including action under Para 16A of the Election Symbols (Reservation and Allotment) Order, 1968,’ it said in its order issued on Friday.

Para 16A gives the poll panel power to ‘suspend or withdraw recognition of a recognized political party for its failure to observe Model Code of Conduct or follow lawful directions and instructions of the Commission’.

While issuing him show-cause notice on January 16, the Commission had quoted him as saying at an election rally that the Congress and the Bharatiya Janata Party will come to distribute money. People should accept it in new currency and ask for Rs 10,000 instead of Rs 5,000 keeping in mind the inflation. He had said that the vote should go to the AAP.

Reacting to the order, Kejriwal said EC is wrong and he will challenge it in the court.

In his reply to the poll panel, Kejriwal had not denied making the remarks and had maintained that he had neither offered any bribe to any elector nor enticed the voters to accept any pecuniary benefit from any person.

He had said there was nothing in his statement which could be construed to mean abetment to offence of bribery or violating any provision of MCC.

But the Commission rejected his stand and recalled a similar warning issued to him during the 2015 Delhi assembly polls for making similar statements.

The panel recalled that in his reply, the AAP leader had made ‘unqualified promise’ not to make such appeals during the period the model code was in force.

EC said it is ‘anguished to note that you, chief minister of Delhi and a star campaigner of your party and thus expected to conduct in an exemplary manner in election campaigns in a law abiding way for others to emulate, have again violated MCC breaking your assurance to EC given during Legislative assembly election of Delhi, 2015’.