Sri Lankan President Mahinda Rajapaksa has said that he did not want lessons on human rights from outside, days after the UN Human Rights Council adopted a US-sponsored resolution censuring Colombo.

Addressing a public gathering in the central town of Balangoda, Rajapaksa on Saturday said Sri Lanka's human rights protection was inspired by the influence of Buddhism over a period of over 2,500 years.

The president said it was his responsibility to resolve all problems faced by his people.

Rajapaksa said his objective while appointing the Lessons Learnt and Reconciliation Commission was that he did not want the problems faced by the people carried forward to the next generation.

The president said LLRC was Sri Lanka's own probe and no one had the right to force its implementation. He said he did not want lessons on protecting human rights from outside.

Rajapaksa's comments were his first direct public reaction since the UN Human Rights Council on March 22 adopted the resolution against Sri Lanka.

The resolution asks Sri Lanka to implement the LLRC recommendations towards reconciliation with the Tamil minority and for accountability over alleged rights violations during the last phase of the war against Liberation Tigers of Tamil Eelam. 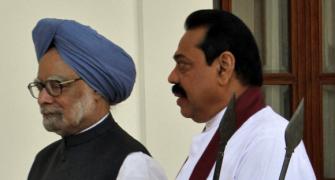 DMK has NOTHING to do with India's vote against SL
US: Kashmiri separatist Fai who spied for ISI sent to jail
Sri Lanka: Moving forward

We have proud record of safeguarding human rights: Lanka

Will not abide by UNHRC resolution: Sri Lanka