Digvijay says protest against him part of RSS/BJP plan D

He had earlier described the agitations over the black money issue and Lokpal bill by Baba Ramdev and Anna Hazare respectively as plan A and plan B of RSS/BJP and added that roping in Sri Sri Ravishankar was their Plan C.

"Nothing much. It was part of BJP/RSS plan D", Singh said about the attack on him.

Singh on Thursday faced the wrath of BJP workers protesting against price hike while he was waiting to board a Delhi-bound train at Mughalsarai railway station.

Tempers ran high as BJP workers, who were holding black flags, clashed with Congress activists, as they tried to enter the waiting room at the station, where Singh was sitting.

Later, the All India Congress Committee general secretary told reporters, "What else can these (BJP) men with black hearts do other than show black flags?"

A few days back Singh commented on microblogging site Twitter that "Plan A, B and C are of Sangh/ BJP to divert the minds of the people from their involvement in terror activities to corruption. Plan A - Baba Ramdev. Crashed. Plan B- Anna. ? Plan C - Sri Sri Ravi Shankar soon to start his campaign".

His remarks had evoked a strong reaction from the BJP, which later said the Congress leader is Plan 'D' of his party which could be "dirty tricks department" and that he speaks for Sonia Gandhi.

"Digvijay Singh is D Plan of the Congress. Whether one calls it dirty tricks or duffer...," BJP spokesperson Prakash Javadekar said, adding Congress should not merely distance itself from his comments but also criticise him. 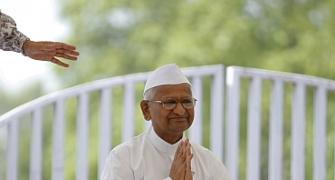 Hazare does a U-turn, back in anti-Congress mode 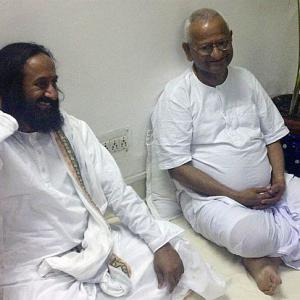