My name is Samana. I'm three years old and I live with my family in Minnesota.

I recently went to India with Mommy, Daddy and my little sister, Sammita, for my Athe's (aunt's) wedding. My Ajji (grandmother) and Taatha (grandfather) who live in India had told me I could be the flower girl. They call it something else in India, but I wanted to be the flower girl only.

Before we left for India, Daddy told me he did not have a car there. But there are many cars in Bangalore. There are many motorbikes too. In my Ajji and Taata's house, there are three motorbikes. I call them daddy motorbike, mommy motorbike and Samana motorbike.

My Mama (uncle) rides the green daddy motorbike when he goes to office. He wears a jacket and a helmet and looks like a spaceman when he rides it. I wish it were pink. I told my daddy I want a pink motorbike just like Mama's when I grow up.

The mommy motorbike is red and I can stand in front when Daddy or Taata drive. Everybody calls it a scooter.

The small one, which is like a bicycle (moped), was broken; I could not ride it.

I was not sad because Daddy did not have a car in India. Motorbikes are more fun! Also, there is a strange car with three wheels; we don't have them at home but there are lots of them on the road in India. You have to call loudly, 'Auto!' If one is empty and is going real slow, it will stop. Before you get in, you have to tell the driver where you want to go. If he says yes, you can sit inside. Sometimes, he says no and goes away. The fun part is that it has no doors or seat belts! It has a meter and after sometime the numbers on it start changing fast. Mom explained that we have to pay the money shown in the meter when we get off.

There are so many cars, so many people, so many autos and so many coconuts in Bangalore.

Mom and Dad shopped so much with Athe and the others before the marriage that I would get really tired sometimes. I have a Dodamma, my favourite one, who lives in Pune and who got me many pretty clothes. I think she is my fairy godmother. She gave me the perfect dress to wear when I became a flower girl.

So many people came for the marriage. Everybody would come and talk to me and pinch my cheeks. I did not like it at all 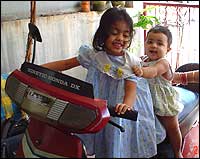 and I told mommy that I don't want to be a flower girl any more.

But I liked sitting on the floor and eating food from the banana leaf. And I got to wear lots of different dresses. I did not have as much jewellery as my mommy did so I told Dodamma to give me all her jewels and clothes after I grow up. Sammita, my little sister, can have Mommy's. The marriage went on and on for two days. In the end, everybody was tired.

Then, I went to Mysore in a train! In Mysore, Daddy took me in an auto to see a palace with a castle around it. There is a big mountain and there is a palace on it too. There are so many palaces in Mysore. I wanted to go inside all of them and see who lived there. Dad told me there are no kings and queens now.

You know, I want to become a princess and get married to a prince. I want to marry now so that when I grow up I can become a queen and live in a palace.

But Daddy did not take me inside any palace. He just showed me the closed gate and told me some stories about the kings and queens who used to live there. When I came back to Bangalore, I used to play Cinderella with Mommy and Daddy. I let Mommy be Cinderella so she could be the princess and my dad would be her prince. I was Drisella, Cinderella's stepsister. I was not very mean to her though!

After visiting Mysore, Daddy had to go back to Minnesota. Sammita, Mommy and me went to Pune to stay with Dodamma for some time. Dodamma's house is really tall and has a big wall and a huge gate, just like a castle. There is a park inside and lots of other houses too. I made lots of friends and played with them. But I couldn't understand what they were saying sometimes. I can understand Kannada but they were speaking another language. Anyway, I would speak to them in English and they understood.

We did lots of fun things. Mommy went shopping, again. Since it was Deepavali, my Dodappa got me lots of sparklers, flowerpots and something called chakra. That was scary because it goes on the ground and sometimes comes at you. I loved the sparklers and the flowerpots. There were other things that went boom-boom. I liked them as well.

I also went to the Nemo movie (Finding Nemo) with my friends. A strange thing happened there. In the middle, the movie suddenly stopped. My friends explained it was a break so that we could buy something to eat. After some time, it started again. I liked the movie very much.

In Pune, I also met Mousi who sometimes came to our house and helped us. She was like other people and did not look like a mouse. I don't know why everybody kept calling her Mousi.

Now I am back in Minnesota. I have so many stories to tell all my friends at school and so many dresses to show them.

Samana is quite imaginative and talkative. But she cannot write on her own yet so her father Sudheer R Hullemane wrote this diary for her. She has mixed feelings about being back in Minnesota. She likes the familiar surroundings but misses her extended family and the hubbub in India. Two years ago, she wrote about her first birthday party with her aunt's help.