A candid videotape of the late Princess Diana talking about her love affairs, marriage and struggle with bulimia will be broadcast on US television on Monday. 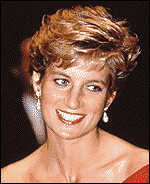 The NBC network will air the tapes recorded between 1992 and 1993 by her voice coach Peter Settelen.

The latest incursion into the lives of Diana and Prince Charles during the most difficult period of their ill-starred marriage is to be shown in two one-hour documentaries on NBC on Monday and on December 6, The Sun reported Saturday.

According to the report, the tapes made at the Kensington Palace between 1992 and 1993 shows Diana claiming that Prince Charles only wanted sex with her once every three weeks.

"There was never a requirement for it from him. Once every three weeks about, and I kept thinking - it followed a pattern.

"He used to see his lady once every three weeks before we got married," Diana said in the tape.

No comment was forthcoming from Buckingham Palace on the latest round of embarrassing claims about the marriage.

In the tape, Diana also described how Charles' interest in love-making "fizzled out" completely after the birth of Prince Harry in 1984. She revealed how she went sobbing to the Queen for help after her husband refused to give up his mistress Camilla Parker Bowles.

But, according to her, she got little help from the Queen in 1986 after discovering that the Prince was seeing Camilla again.

According to the Princess she and the Prince met only 13 times before they married.

"He'd ring me up every day for a week and then he wouldn't speak to me for three weeks. Very odd.

"I thought: 'Fine. Well, he knows where I am if he wants me'. And the thrill when he used to ring up was so immense and intense.

She also spoke of the pain she felt at her engagement when a reporter asked if the royal couple were in love.

Diana said she replied: "Of course we are." Then, according to her, her fiancee added: "Whatever in love means."

On tape, she said: "That threw me completely."

Most intriguing, perhaps, are her remarks about Barry Mannakee, with whom she allegedly had an affair in 1985 and who was subsequently moved from duties as a royal protection officer at Kensington palace. Two years later, he died in a road accident when he was riding pillion on a fellow policeman's motorcycle.

Without mentioning Mannakee by name, the princess said: "It was all found out and he was chucked out. And then he was killed. And I think he was bumped off.