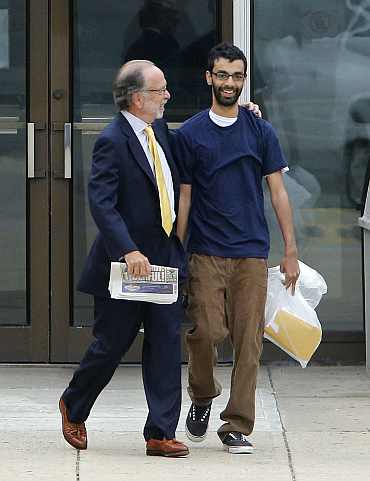 Dharun Ravi, an Indian American student was released from prison on Tuesday after spending 20 days behind bars for spying on his gay roommate, but will not be deported to his native country India.

The 20-year-old former Rutgers University student walked out from the Middlesex County Jail after serving 20 days of his month-long jail term.

In accordance with New Jersey state rules, Ravi earned five days credit for good behaviour and a similar number for working in jail.

The India-born student had faced deportation to India after he was convicted in March this year on 15 counts of bias intimidation and invasion of privacy for using a web cam to spy on his roommate Tyler Clementi's sexual encounter with another man in September 2010.

Clementi had committed suicide days later by jumping off the George Washington bridge after he found out Ravi had spied on him and had told his other friends about his date with another man.

Ravi, who moved to America with his parents when he was about five years old, is a permanent resident of the US but not a citizen.

The US Immigration and Customs Enforcement (USICE) said Ravi would not be deported to India after taking into account his record.

"Based on a review of Ravi's criminal record, ICE is not initiating removal proceedings at this time," the ICE's Office of Public Affairs said in an emailed statement to PTI.

The agency added that individuals who committed certain crimes like aggravated felony, domestic violence crime, drug or weapons offenses or crimes involving moral turpitude, could be removed from the United States.

Apart from his 30-day jail term, Ravi was sentenced to three years' probation, ordered to do 300 hours of community service and fined about USD 11,000.

He had faced up to 10 years in prison.

The prosecution has appealed his jail sentence saying it is too lenient and had sought he be jailed for five years.

Ravi had surrendered to the Middlesex County Sheriff's office on May 31 after he had agreed to begin serving his jail term instead of waiting for an appeals court to rule on the prosecution's request for a lengthy prison term.

Clementi's suicide had sparked a nationwide debate on cyberbullying and treatment of young gays and lesbians.

Dharun Ravi could walk free from jail next week