Devolution package for Tamils not out of radar: Sri Lanka

Source: PTI
November 26, 2010 15:44 IST
Sri Lanka on Friday assured India that a devolution package for the minority Tamil community in the country was not out of its radar as it discussed with India the key issue of resettlement of internally displaced people in the post Liberation Tigers of Tamil Eelam era.

"The issue is not out of sight and is not out of the radar," Sri Lankan Foreign Minister G L Peris told mediapersons after the seventh India-Sri Lanka joint commission meeting co-chaired by him and External Affairs Minister S M Krishna in Colombo, referring to the devolution issue.

Peris said his government was addressing the important issues of demining and rehabilitation after the defeat of the LTTE in May last year. He noted that Sri Lankan President Mahinda Rajapaksa recently had a discussion with the pro-LTTE Tamil National Alliance to elicit their views on the issue.

On his part, Krishna said Sri Lanka has the historic opportunity to settle outstanding issues between different language-speaking people in the island nation. "We hope it could be done with understanding and cooperation," he said. Replying to a question on concerns of Tamil Nadu Chief Minister M Karunanidhi on the resettlement issue, Krishna said, "Though a large number of Tamil IDPs have been resettled, some (between 17,000 to 20,000) are still in camps, but they are finding their feet."

He said Karunanidhi was concerned as he represents a state comprising Tamils. "I am sure the Sri Lankan government is sensitive to this issue."

At the joint commission meeting held for the first time since 2005, India and Sri Lanka decided to constitute a joint working group on tourism and expressed their commitment to enhance people-to-people movement between the two countries. The two sides also decided to launch a ferry service between Colombo and Tuticorin in Tamil Nadu.

Earlier, Krishna met Rajapaksa and discussed issues of bilateral interests. "We exchanged quite a few thoughts," he said.

The Indian minister, who is in Sri Lanka on a four-day visit, said on Thursday that a "meaningful "devolution package aimed at the minority Tamil community would help create lasting peace in Sri Lanka and hoped that discussions on the issue would begin soon.

"The end of the armed conflict holds out hope that an era of reconciliation and meaningful devolution package will begin in Sri Lanka," he had said.
Get Rediff News delivered into your Inbox.
Source: PTI© Copyright 2020 PTI. All rights reserved. Republication or redistribution of PTI content, including by framing or similar means, is expressly prohibited without the prior written consent.
Related News: Liberation Tigers of Tamil Eelam, Sri Lanka, Krishna, M Karunanidhi, Peris
SHARE THIS STORY
Print this article
Why New Delhi fiddles when Lanka burns 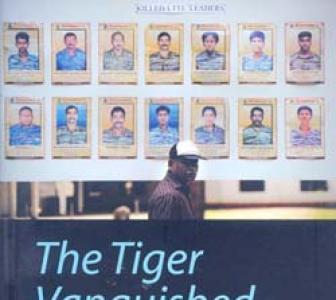 'The LTTE can never re-emerge'
After Prabhakaran, what next?