US Indians pitch in for Katrina victims

Thus, 11-year-old Shruti Desai, who was among those who gathered to help, spent five hours making up Ziploc plastic packages -- containing toothpaste, moist towels, shampoos, soaps and other everyday needs -- for the evacuees displaced by Katrina.

Also engaged in the task of making up such bags was Premal Desai. Having recently fractured her leg, she could not go to the Houston's Reliant Astrodome, where nearly 17,000 evacuees have received shelter, for relief work, so she decided to do what she could where she was. 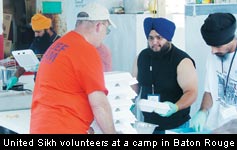 The lessons, at which about 10,000 volunteers were present -- a few hundred of whom were of South Asian origin -- covered basic details such as hygiene (washing hands and changing gloves), checking food temperature, dressing in comfortable clothes, and most important, being compassionate.

Says Pal, "You should be supportive of the people and not take things personally. Some of them might be angry; they might even curse god."

"It is heartening that we did not find a single Indian family among the evacuees," he adds.

The Interfaith Ministries for Greater Houston, in coordination with Texas state and local governments, organised the training for Operation Compassion -- an effort to feed the thousands of evacuees sheltered at the George R Brown Convention Center in Houston.

A total of 200,000 people from the affected states of Louisiana, Mississippi and Alabama have taken shelter in Houston explains S 'Sam' Kannappan, a prominent community leader who is coordinating relief efforts in Houston. Of them, about 25,000 evacuees have been accommodated in shelters.

September 18, more than 700 volunteers from the Indian-American community will take charge of serving food, says Kannappan.

He is on his way to attend a 'Neighbours 2 Neighbours' program supported by the interfaith community, intended to match evacuee families with 'friends' in the city. These 'friends' will help them navigate the transit system, find groceries, help turn on utilities, and when needed, take them to doctors' offices, he says.

The Indian-American community has joined in relief efforts that range from fundraising across the country to folding clothes, cooking vegetarian food conforming to the American palate, throwing open their homes to accommodate those in need or adopting a shelter, like a local Sikh group, United Sikhs (photograph above) has done outside Baton Rouge. It is a consolidated effort by over 40 Indian-American organizations that have divided the chores among themselves.

"We have requested each Indian organization to take up the type of work they are already doing," Kannappan says, examples being the Indo-American Charity Foundation that is an umbrella body for collecting donations from the desi community, and Sewa International that is doing volunteer coordination.

Sundaram Srinivasan, president of the Indian Institute of Technology Alumni of Greater Houston is helping the Houston mayor's office find homes for the evacuees. He has prepared a list of shelters available for free. The first home on the list sent to the mayor's office is his. September 6, he was told four students would come to stay with him.

Accommodating a stranger in your home has to be a well-thought out decision since it could be three or four months before the displaced go back, Srinivasan said earlier. Many desis feel comfortable accommodating only Asian Americans; others may prefer to house only families and no singles. "Even my decision came after a two to three hour discussion with my wife," he says.

Since many Gujaratis own motels in the surrounding areas, the Gujarati Samaj of Houston has joined the IIT alumni in coordinating efforts to shelter the evacuees.

The Bochasanwasi Akshar Purushottam Swaminarayan Sanstha (the socio-spiritual organisation of the Swaminarayan sect that has more than a million followers across the world) has set up relief centres in Houston and Jackson, Mississippi. They will also be making up to 300 rooms available to the evacuees in Jackson in conjunction with local motel owners. Three hot meals are being served at the BAPS temples in these areas.

"At this point, the focus is on people who have special dietary needs, like vegetarian food," says Nilkanth Patel, president, BAPS Care International, a charity organisation linked to BAPS. Patel spent the Labour Day weekend in Jackson, Mississippi, taking stock of the situation.

A BAPS volunteer team is visiting Biloxi, Jackson and Gulfport, where about 200 to 300 Indian-owned motels were affected, Patel said.

He said a few days ago he met a family from New Orleans buying snacks at the BAPS temple in Houston. They had lived in New Orleans for 30 years and as members of the Rotary Club had helped many people. "The man told me -- 'I was giving aid to people, and now I am a recipient,'" he says. "Money (was) not a problem, he told me," Patel add. "We need moral and spiritual support."

In Houston Gajendra Bhakta, owner and manager of the Scottish Inns and Suites  near the Reliant Astrodome, has stretched the motel's 29-unit capacity to accommodate about 150 people. At one point, 200 guests were staying there.While slashing the charge to $55 a night (plus tax), Bhakta has prepared a flyer with shelter information and contacts of Federal Emergency Management Agency (the US government agency responsible for recovery from disasters and response planning) and the Red Cross that he passes on to the guests. "Some of them are looking for jobs and apartments," he said. "We know they are not going back any time soon."

Ever since evacuees from the US Gulf coast began arriving in Houston, Ramesh Shah has shuttled between the astrodome, the George R Brown Convention Center and nearby motels to see if he can help. Last week Shah, a financial adviser with investment bankers Morgan Stanley Dean Witter and the secretary of Ekal Vidyalaya Foundation of USA (a charitable organisation committed to eradicating illiteracy in India), was among 20 volunteers who spent six hours at the Astrodome sorting used and new clothes to be given to the evacuees.

The next day, the volunteers, most of whom work with Sewa International, handed bottled water to a fresh batch of people arriving from Louisiana at the George Brown Center. They accompanied men and women to restrooms, passed out toothbrushes, and ran errands. Monday evening, they were back at the Astrodome, folding clothes.

The long weekend over, Shah was back at work, but hopes to volunteer on weekdays from 8 pm till midnight. "I happen to be here. I am inspired by the people who are coming from New York and as far as California to serve."

His daughter Sonal Shah, co-founder of Indicorps and India Abroad Person of the Year 2003, was among many pouring in from various parts of the country to help in any way they can; she arrived in Houston from New York Friday night, with two of her friends from Philadelphia.

The scene at the Astrodome, where about 3,000 volunteers were serving last week, was overwhelming. "It is a big stadium with the centre full of cots," Shah senior says.

According to Shah, unlike the reported chaos of the New Orleans Superdome, this one was crowded but clean, and food and water were available in plenty. Things became more orderly when the clothes were laid out on hangers like in big stores. The evacuees could take, without needing to ask, what they needed. There was police presence only at the entrance.

Shah says he found mostly African-American evacuees at both shelters; a few Spanish, Chinese, Korean and Vietnamese-speaking people were present at the George Brown Center. "We could not find any Indians," he says.

One would expect the evacuees to be angry and excited, but they were instead calm and appreciative, Shah said. Some were still sleeping.

Volunteerism may be a novel experience for first-generation South Asians, but the younger generations in America are clued in to this mindset. Like among those helping the evacuees was Anjali Desai, who has spent the last two years in India volunteering for Indicorps and for the NGO Manav Sadhna, at the Gandhi Ashram in Ahmedabad in Gujarat. Desai, who just returned from India and has some time on her hands, attended the 75-minute training.

Mumbai to Katrina: Blame it on yourself?