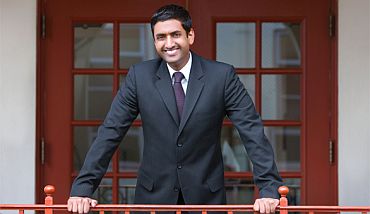 Indian-American attorney Ro Khanna, who served for two years in a senior position in the Obama administration, has raised a record $1.2 million (around Rs 6.24 crore) in one single quarter for his Congressional bid in 2014.

The fund raising details of 35-year-old Khanna were revealed in a report submitted by him to the Federal Elections Commission on January 9.

One of the high ranking Indian-Americans under the Obama administration, Khanna was Deputy Assistant Secretary for the US and Foreign Commercial Service, a unit of the International Trade Administration for two years till August 2011.

He is currently Of Counsel at Wilson Sonsini Goodrich & Rosati, a Palo Alto-based law firm where he specialises in intellectual property and clean technology law.

"Unless I missed something in looking back through FEC records, I don't think any non-incumbent house candidate in the nation has raised more in his or her opening 'out-of-the-gate' campaign quarter in the past decade," wrote Josh Richman in San Jose Mercury News.

"In fact, I see only two or three instances in which a non-incumbent house candidate raised more than that in any single quarter since 2000," Richman said.

Interestingly, Khanna has not announced his constituency, but local media reported that he is eyeing District 15 of California which includes Fremont.

Khanna's fund raisers have attracted top Democratic leaders including Nancy Pelosi, the former Speaker of the US House of Representatives, and eminent Indian-Americans like venture capitalist Vinod Khosla.

"I am most excited by the ideas and energy brought to our campaign by some of our nation's greatest innovators such as Reid Hoffman, Marc Andreessen, and Peter Thiel," Khanna was quoted as saying.

"I learned a lot about what America needs to create an ecosystem for innovation in the 21st century," he said.

Click here for more Realtime News on US elections Tomorrow, no Wikipedia! Do your homework early

California Diaspora: Some blows, some clout