Four years after its opinion was sought by the Centre, the file pertaining to the mercy petition of Parliament attack case convict Afzal Guru, who is on the death row, has been sent to the home ministry by the Delhi government.

The file was sent to the home ministry by Lieutenant Governor Tejinder Khanna after the Delhi government referred it to him recently for his comments, while backing the sentence with a rider, that the implications on law and order should be closely examined while carrying out the execution.

"The lieutenant governor has sent the file pertaining to Afzal Guru's mercy petition to the home ministry for further action," said top sources.

The Delhi government sent the file to LG's office after the 16th reminder from the home ministry. The Supreme Court had in 2005 upheld the Delhi high court's verdict confirming the trial court judgment, which had awarded capital punishment to Guru, for his role in the conspiracy behind the December 13, 2001, terror attack on Parliament.

Afzal's file was lying in the cold storage for the last four years with the Delhi government, which swung into action only after May 6, when Pakistani terrorist Ajmal Kasab was handed down the death sentence for his role in the Mumbai terror siege.

Afzal Guru's hanging has been a major issue for a section in the Congress as well the Bharatiya Janata Party, which has raised the matter numerous times in both houses of Parliament and the Delhi assembly. 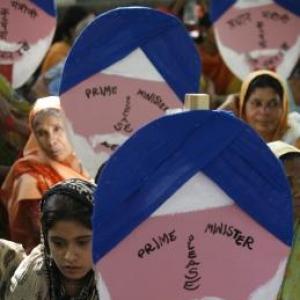