News
Business
Movies
Sports
Cricket
Get Ahead
Money Tips
Shopping
Sign in  |  Create a Rediffmail account
Rediff.com  » News » 'You have to be alive to celebrate any festival': HC says no Chhath puja

'You have to be alive to celebrate any festival': HC says no Chhath puja

Observing that a person has to be alive to celebrate any festival and practice any religion, the Delhi high court on Wednesday refused permission for celebrating Chhath puja at public places when a third wave of COVID-19 has hit the national capital. “While religious sentiments of all sections of the society must be respected, the right to life and health of the public at large cannot be sacrificed at the altar of a right to celebrate a festival, however, significant it may be for a particular community," said a bench of Justices Hima Kohli and Subramonium Prasad.

The observations by the court came even as chief ministers of Uttar Pradesh and Bihar--Yogi Adityanath and Nitish Kumar--urged caution during the celebrations due to the COVID-19 pandemic.

Adityanath urged people to try to celebrate the festival from the confines of their homes as they had done for the previous festivals.

In Mumbai, the Brihanmumbai Municipal Corporation has put restrictions on mass celebration of Chhath puja at beaches, river banks and other natural water bodies in the city and asked devotees to avoid crowding.

Pronouncing its order, the Delhi high court said the right to health of residents in the capital is supreme and granting any such permission to celebrate Chhath puja at public places like ponds, riverbanks and temples would necessarily result in the celebrations turning into a “super spreader” of the infection.

"This is the time to scale down to contain the infection and not to escalate the same,” it said while dismissing a petition by Durga Jan Seva Trust, challenging the November 10 order of Delhi Disaster Management Authority not to allow any gathering in public places for Chhath puja on November 20.

The bench said the plea seeking permission to hold a gathering of 1,000 people for Chhath puja, is meritless.

“Oh really! Today when the Delhi government is not allowing marriages with over 50 persons, you want only 1,000 persons. How come?,” it remarked.

The high court said it sees no reason to interfere with the November 10 order of DDMA which has taken into consideration the spread of the COVID-19 infection in Delhi and decided not to allow any persons to gather in public places to celebrate Chhath puja.

During the hearing, the bench observed that the right to health must be respected first and the person has to live to be able to practice any religion.

“You have to be alive to celebrate any festival."

The bench said it appeared that the petitioner trust has lost sight of the COVID-19 pandemic situation in Delhi where even as per the city government, represented through additional standing counsel Sanjoy Ghose and advocate Naman Jain, a third wave is under way.

“The daily infection rate in the past one week is hovering between 7,800 to 8,593. The daily death rate has crossed double figures and has touched 104 just a few days ago. Even as on date, there are 42,004 active cases of COVID-19 infection in Delhi.

“In such circumstances, the petitioner/Trust cannot expect the respondent/State to permit it to organise a Chhath puja for over 2 lakh persons at a public place in Delhi. Any such permission if granted, would necessarily result in the said celebration turning into a super spreader of the infection,” the bench said.

“In today's day and time, the petitioner/Trust's desire to celebrate Chhath puja at such a large scale at public places, is belied by the existing ground reality prevalent in Delhi. The petitioner/Trust should have been alive to the said situation before approaching the court for such a relief.”

Chhath puja is celebrated by thousands of people in the capital, especially those hailing from Bihar and eastern Uttar Pradesh.

Advocate Ranjan Chaudhary, representing the Trust, submitted that while passing the order, the authorities have not taken into consideration the fact that Chhath puja is a major religious festival that is celebrated by the people of Bihar and eastern UP on an annual basis.

He said that for the past several years, the Trust has been organising the Chhath puja at the Kirari MCD ground which can accommodate over 2 lakh people and this time too, it may be permitted to organise the puja at the same place by adopting all safety measures.

The Trust contended that the directions issued by the authorities not to organise such a puja during the COVID-19 pandemic overlooks the religious sentiments of the people and amounts to violating their right to conduct ceremonies at public places.

In the national capital, a city-based organisation of 'Poorvanchalis' -- people hailing from Bihar and eastern Uttar Pradesh -- plans to host Chhath puja online for devotees.

Folk songs dedicated to the Sun God and aroma of traditional offerings filled the air at homes only as the ghats in Delhi, otherwise decked up for devotees every year, are not to be used this time.

The organisation, Poorvanchal Gaurav, is hosting the festival online from November 18-20. The festival is celebrated to pay obeisance to the Sun as a cosmic energy.

A member of the organisation said the festivities would be hosted on Facebook and YouTube so that devotees don't miss the sense of the community gathering that happens on ghats and other water bodies during the festival. 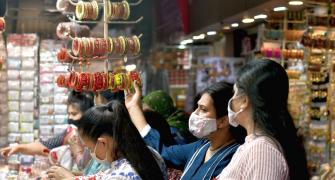 Festivities behind surge in Covid cases in Delhi: Govt Curbs on mass Chhath Puja in Mumbai in view of Covid