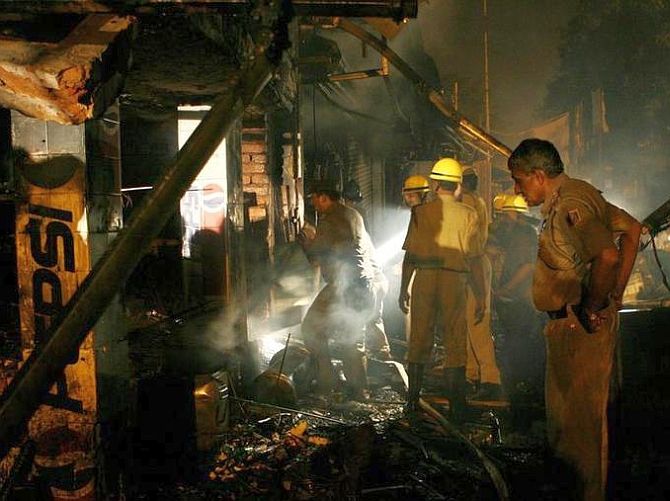 A Delhi court on Thursday acquitted two persons, accused in 2005 Diwali-eve serial blasts case which had claimed 67 lives, saying the prosecution has failed to prove their guilt.

However, he held the third accused, Tariq Ahmed Dar, guilty of being a member of a terror outfit and giving support to it, but let him off too, saying he has already undergone more than 10 years in jail, which is the maximum punishment prescribed under the law for these offences.

The serial blasts at three places - Sarojini Nagar, Paharganj and Kalkaji - on October 29, 2005 had taken a toll of 67 lives and injured over 225 persons.

Dar was convicted for the offence punishable under Section 38 (being the member of a terror organisation) and Section 39 (giving support to such outfit) of Unlawful Activities Prevention Act.

Farooq Ahmed Batloo and Ghulam Ahmed Khan had earlier pleaded guilty and were let off by the court for the period already undergone by them. Terror funding was the allegation against both these accused.

Three separate cases were registered by Delhi Police’s Special Cell following the blasts. The court had clubbed all the three cases for the purpose of recording of evidence.

As per the prosecution, Dar, along with Abu Ozefa, Abu Al Kama, Rashid, Sazid Ali and Zahid, had allegedly entered into a criminal conspiracy to wage a war against the country and planned serial blasts. All these five co-accused are still at large and are said to be in Pakistan-occupied Kashmir.

Prosecution said that Dar had allegedly hatched a conspiracy with the Lashkar-e-Tayiba militants to plan and carry out the bomb blasts in the national capital.

How the Delhi blasts case was cracked

The message from the Delhi blasts