Subhan's mother appeals for him to surrender 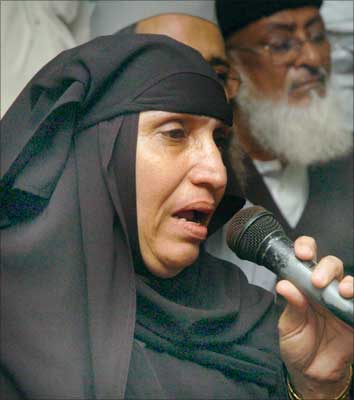 The mother of Abdus Subhan Qureshi alias Tauqeer, prime accused in Delhi and Ahmedabad serial blasts, said on Wednesday that her son should be punished if found guilty.

"If my son is involved then he should be punished in front of us. We will not stop him being hanged also if he is found guilty," said Zubeda Qureshi.

Addressing a press conference in south Mumbai, Zubeda said her son was innocent, had a good family background and could not have done such acts.

She also appealed to him to surrender himself irrespective of whether he is innocent or guilty.

"We are all from a good family, all of you should understand that," she said adding that all her other children were raised well.

Subhan is also suspected to have sent threatening mails prior to Delhi blasts being involved in carrying them out.

Source: PTI© Copyright 2021 PTI. All rights reserved. Republication or redistribution of PTI content, including by framing or similar means, is expressly prohibited without the prior written consent.
SHARE THIS STORY
Print this article
Wide tentacles ensure SIMI's plans go on
Breaking Indian Mujahideen code is the key: IB

SIMI bombmaker may be key to blasts