News
Business
Movies
Sports
Cricket
Get Ahead
Money Tips
Shopping
Sign in  |  Create a Rediffmail account
Rediff.com  » News » End of the road for INS Vikrant: 14 things you should know

Decommissioned aircraft carrier INS Vikrant’s 52-year voyage came to an end on Friday as workers at the Darukhana ship-breaking yard in Mazgaon docks in Mumbai began scrapping down the warship. After a prolonged legal tussle, the Supreme Court had earlier this year in August rejected a Public Interest Litigation to convert Vikrant into a museum. The warship was decommissioned after 35 years of distinguished service on January 31, 1997.

The warship was Indian navy's "pride and joy", whose name is synonymous with naval aviation. Belonging to the Majestic class of light fleet carriers and having a displacement of 20,000 tons, Vikrant is today slowly being ripped apart. 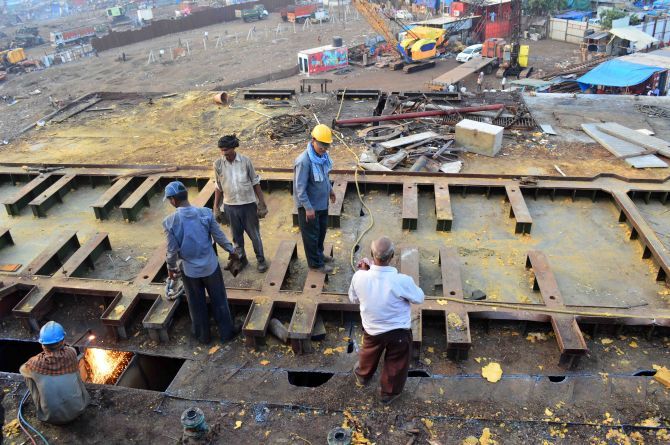 Here are some glimpses into INS Vikrant’s iconic past:

1) Vikrant was India's first aircraft carrier which wrote a glorious chapter in the history of the Indian navy in the 1971 Liberation War of Bangladesh and gave a new lease of life to the carrier concept which was under a cloud the world over.

2) The carrier, which was formally commissioned into the Indian navy in March 1961 at Belfast, Northern Ireland, by the then Indian high commissioner to the United Kingdom, Vijayalakshmi Pandit, formally joined the Indian fleet at Bombay on November 3, 1961, where it was received at Ballard Pier by independent India's first prime minister, Jawaharlal Nehru and other high-ranking dignitaries.

3) Vikrant's finest hour came 10 years later when it played a pivotal role in the 1971 Bangladesh war in spite of a crack in its boiler and was considered such a prized catch by the Pakistanis that they sent their submarine Ghazi all the way to the Bay of Bengal to drop mines outside Visakhapatnam harbour and sink the aircraft carrier off the harbour. 4) Vikrant was one of the six Majestic class light fleet carriers which the Royal navy decided to build for itself midway through the Second World War. The war ended even before the first of these carriers could be completed.

5) Ironically, not a single one of these six ships served in the Royal navy. Two each were bought by the Canadian and the Australian navies. All these have long been decommissioned and scrapped. The fifth, the Hercules, was bought by the Indian navy and renamed the Vikrant. The sixth, named the Leviathan, has also been scrapped.

6) Though the carrier was first launched as Hercules in 1945, her construction work was suspended almost immediately. The ship was then kept in a state of preservation by the British admiralty until she was acquired by India in early 1957. The Vikrant was then moved to Belfast for her refit and modernisation, which was carried out at one of the reputed private shipyards. On completion of her refit, the ship was commissioned into the Indian navy in March 1961.

7) The Hercules, which was built by Vickers Armstrong, was purchased by India and underwent a four year refit at the Harland and Wolff Yard in Belfast, before being commissioned as Vikrant. At Harland and Wolff, the carrier was fitted with an angled flight deck and a steam catapult, both post-war inventions and armed with two squadrons of aircraft, the British Seahawk and the French Alize.

8) Captain Pritam Singh was the first commanding officer of the carrier. On May 18, 1961, the landing and arresting of the first jet aircraft on board took place. The honour of performing this feat went to Lieutenant (later Admiral) R H Tahiliani.

9) Till the Bangladesh war, the Vikrant had rarely fired a gun in anger. During the 1962 Indo-China conflict in 1962, there was talk of sending the Seahawks to the north to operate from airfields in Assam. A squadron was in fact developed for a few weeks. 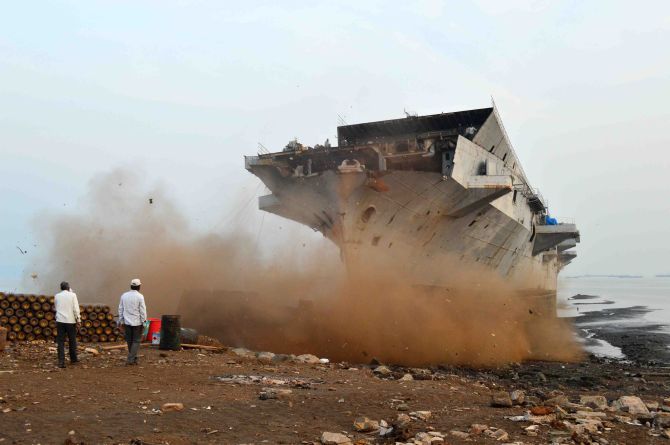 10) During 1965, the Vikrant found itself under refit in the drydock, though the Pakistanis, in the heat of battle, claimed that they had sunk it. The carrier's aircraft were sent to Jamnagar and just as they were being primed for a night raid on Karachi, they were recalled for the defence of Bombay.

11) Such was the performance of the ship in the liberation of Bangladesh that it earned two Mahavir Chakras and 12 Vir Chakras.

12) Everyone loves a hero. The ship received a tumultuous welcome when she returned to Madras. The civil administration led by then chief minister M G Ramachandran, organised a special meal for the entire crew of 1,100, served on banana leaves, on the jetty.

13) Once, when the ship was berthed at Bandar Abbas, the shah of Iran flew the officers to Teheran for a special concert. In West Asia, where the only aircraft carrier people had seen were from the United States, they were surprised to see that an Asian navy could also fight a three-dimensional war.

14) The ship had one more achievement, when she received the navy's first Harrier VSTOL jump jet on board. The ship was given a ski jump in the naval dockyard for operation of the Harriers, which meant the end of carrier flying for the Alizes.

Image: The process of breaking the country's first aircraft carrier, the iconic, INS Vikrant, which was decommissioned in January 1997, began at the Darukhana ship breaking yard on the eastern coast of Mumbai. Photograph: Sahil Salvi 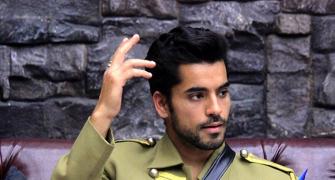