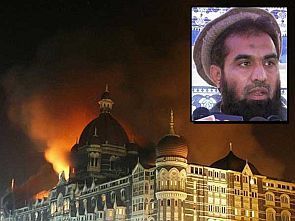 A day after the Islamabad high court cancelled his detention, Zaki-ur-Rehman Lakhvi, the alleged mastermind of the 2008 Mumbai attack, has been arrested once again by the Pakistan authorities.

"Lakhvi has been arrested in another case," an interior ministry spokesman told PTI. However, he said the details of the case would be provided to the media later.

"Lakhvi was then presented before a magistrate who remanded him in custody," the official said.

Confirming the arrest, Lakhvi's lawyers on Tuesday said that his case will be challenged in the court.

"My client has been re-arrested. This is manipulation and we will appeal against the order," Abbasi said.

There were intense speculations earlier that Lakhvi will be released from the Adiala Jail on Tuesday after the Islamabad High Court ordered his conditional release on Monday.

India had on Monday summoned the Pakistani envoy to "convey concern" over the Islamabad high court order for the conditional release of Zakiur Rehman Lakhvi.

Justice Noorul Haq Qureshi who heard a petition filed by Lakhvi, seeking an end to his detention, suspended his detention on Monday and asked him to submit a security bond of Pakistani Rs 1 million (around $9,000).

On December 18, Lakhvi was granted post-arrest bail by an anti-terrorism court in Islamabad. However, the federal government extended his detention in the Adiala Jail under the Maintenance of Public Order Ordinance.

On December 26, Lakhvi challenged his detention in the high court.

During Monday's hearing, Lakhvi's counsel Rizwan Abbasi said the court previously accepted his client's bail plea, but the administration detained him, which was unlawful. He said grant of bail was an issue of fundamental right.

After hearing the arguments, the court suspended Lakhvi's detention.

Lakhvi is among the seven people charged with planning and helping to carry out the 26/11 Mumbai terror attack. The six other men facing trial in Adiala Jail for their alleged involvement are Hammad Amin Sadiq, Shahid Jamil Riaz, Younas Anjum, Jamil Ahmed, Mazhar Iqbal and Abdul Majid.

At the time of the terror strike, Lakhvi was believed to be the operational head of the banned Laskhar-e-Tayiba that has been accused by India of carrying out the attack in its financial capital that killed 166 people and left over 300 injured.

Lakhvi, along with Zarar Shah, was allegedly the attack's key planner.

The development evoked sharp reactions from India. The government summoned Pakistan High Commissioner Abdul Basit to convey its "strong concern" over lack of effective action in case and said there appeared no end to that country remaining a safe haven for terror groups despite its own recent tragedies.

India raised its concerns both in New Delhi and Islamabad, while both the ruling Bharatiya Janata Party and opposition Congress slammed Pakistan.

She told Basit that India expected Pakistan to abide by the commitment that expeditious steps would be taken to bring all those responsible for the heinous acts of terrorism in Mumbai to justice.

"It was extremely disturbing that despite the assurances we have been receiving over the last 6 years, and the recent tragedies in Pakistan, there seems to be no end in sight to Pakistan remaining a safe-haven for well known terror groups," the statement quoted Sujatha Singh as telling Basit.