Source: PTI
May 20, 2010 19:52 IST
Four members of the Guru Satam gang, including Vijay Thopte, who had jumped parole while serving a jail sentence for murdering trade union leader Datta Samant, were on Thursday arrested from Navi Mumbai, said the police. Thopte, 36, was carrying a reward of Rs 10,000 on his head, the police said, adding that he had been absconding since 2005.

Acting on a tip-off, the police laid a trap today afternoon at Raghu Leela Mall near Vashi railway station, where the four arrived to extort money from a victim, Deputy Police Commissioner (Crime), Navi Mumbai, Datta Shinde told PTI. A pistol, a revolver and six live cartridges were recovered from them, he said.

The other three have been identified as Jagannath Jaiswal, 39, Sandeep Tiwarekar, 36 and Deepak Pednekar, 35. Thopte, a hired killer, was convicted for gunning down Samant in 1997 following a trade union rivalry. Samant controlled several trade unions in as many as 4,000 factories in and around Mumbai, which employed more than a million workers.

Besides Thopte, others convicted for the murder of Datta Samant were Ganpat Bamne and Anil Londhe. While Londhe died in jail, Bamne is still serving his jail term. The Bombay high court, while hearing appeals filed by Thopte and Bamane challenging their conviction by a lower court, had summoned Mumbai Police Commissioner P Sivanandan and Pune Police Commissioner Satyapal Singh to appear in person and explain what steps were being taken by the police to trace the absconding convict.

Sivanandan had appeared in person before Justice B H Marlapalle on May 3 and assured the court that a reward of Rs 10,000 had been declared to track down the convict. However, the police chief of Pune could not appear because of traffic congestion on the way to the court. The matter has been posted for further hearing on June 9 in the high court. Thopte was a resident of Pune district and had several cases of murder and attempt to murder registered against him in Mumbai. 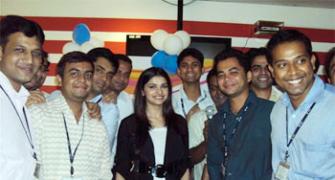