A 20-year-old Dalit youth, allegedly involved in illicit liquor trade, was tortured to death and his leg chopped off by his rivals in Punjab's Mansa district, following which three persons have been arrested.

He said efforts are on to nab three other accused-- Amandeep Singh, Babrik Singh and Sita Singh.

A case of murder had been registered against the six, one of whom is a Dalit, in connection with the incident.

Police said the incident was a fallout of inter-gang rivalry and that the two groups had been involved in clashes in the past too.

The victim Sukhchain Singh and his friends were called by the other group on the pretext of settling a dispute on Monday.

His body was recovered from the house of Balbir, one of the accused, police said.

There were injury marks on the body and leg was also found chopped off, police said, adding the missing limb has been found in the fields, nearly 400 meter from the crime scene.

The family of the victim had refused to cremate the body until the chopped off limb is found.

"We shall now request the family of victim to cremate the body," the SSP said.

He said two persons of the rival group, who are not named in the FIR, have been rounded up for questioning.

The incident drew condemnation from the opposition Congress, which alleged the perpetrators had links to the ruling Akali Dal.

Punjab Congress Committee chief Amarinder Singh, locked in a bitter war of words with the Akali leadership, cited media reports to claim that two of the accused had links with the ruling party. He said they were the nephews of Gharanghna sarpanch whose father was the driver of the Punjab chief minister.

"Dalits in the state are feeling extremely insecure and fear for their safety under the SAD rule," he said, expressing shock and concern at the situation.

"These developments can have serious consequences for the future of Punjab," he warned, adding the Badal government was "meticulously destroying" the secular character and peaceful environment of the state.

"It is clear that these atrocities are being committed against Dalits in Punjab, particularly in the Malwa belt, by those having the patronage of the SAD leadership," he alleged and attacked state BJP president Vijay Sampla, also a Dalit, for being a "mute spectator" to the "excesses".

Condemning the killing, Aam Aadmi Party Punjab Convener Gurpreet Singh Waraich attacked the state government and said the Punjab Police is "failing" to provide security to the people of the state.

Waraich alleged law and order situation has gone from "bad to worse" in the state during the Akali-BJP regime.

"The incident is the horrifying reminder of the Bheem Tank murder case of Abohar and shows that drug and liquor mafia patronage by Akali leaders is killing the Dalits everyday without any fear of police," Waraich alleged.

Taking strong note of the incident, Union minister and Punjab BJP President Vijay Sampla said he has called up Punjab DGP Suresh Arora and demanded strict action against the accused.

Sampla said he has asked state general secretary Kewal Kumar to visit Mansa and meet the family of the victims and prepare a report in this connection.

A similar incident was reported in the state last year when a Dalit Bheem Tank and his friend, Gurjant Singh, were allegedly attacked with sharp-edged weapons in Abohar in Fazilka. Bheem's limbs were chopped off and he had later died in hospital.

Meanwhile, BJP national secretary Tarun Chugh condemned the brutal murder of Dalit youth and urged the government to probe the matter and nab the culprits at the earliest.

He, however, criticised Punjab Congress chief Amarinder Singh for "politicising" the issue.

Chugh said in the past too "instead of acting responsibly", Amarinder had been trying to "provoke the people just to gain some political brownie points".

"Amarinder has forgotten that it was the duty of people in high positions to ensure that peace and communal harmony prevail in the state," Chugh said.

IMAGE: Sukhchain Singh was killed by a rival liquor smugglers. 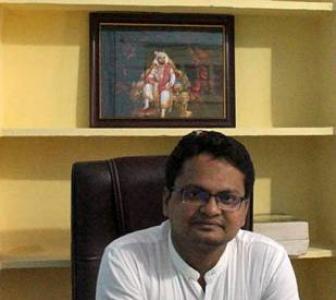 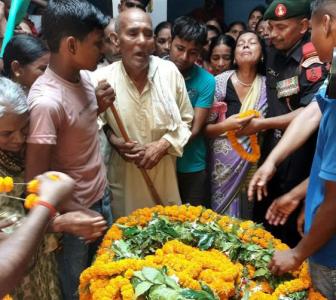