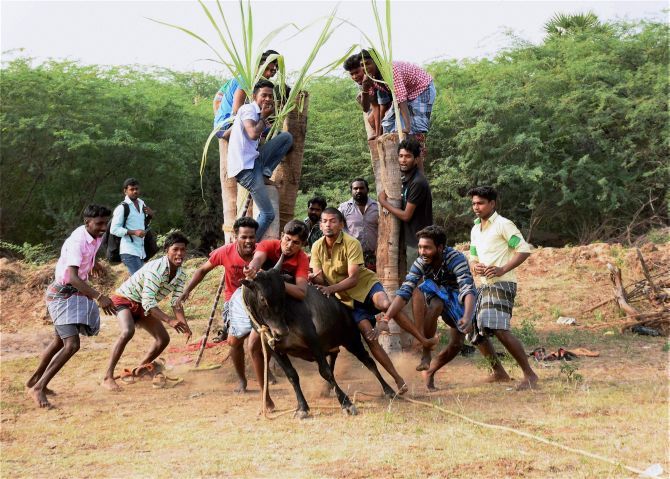 Asserting that cruelty is inherent in the bull-taming sport Jallikattu which cannot be regulated, People for the Ethical Treatment of Animals on Thursday said lawmakers should not encourage a tradition which causes unnecessary pain to an animal.

Dr Manilal, director veterinary affairs, PETA, underlined that the animal which is used in the sport is tortured, people scare it, irritants are put inside its eyes and nose and is poked with sharp equipments.

Retorting to the possibility of the central government rolling out an ordinance in support of Jallikattu, Dr Manilal said that the Constitution of India states that any person which keeps an animal in his holding must ensure that there is no unnecessary suffering caused to the animal and that Jallikattu is all about troubling the mammal.

“Cruelty is happening with animals in this sport. Cruelty is inherent in this sport. You cannot regulate it even if you want it. From 2008 to 2014, the Supreme Court had imposed strict regulations, and during the time when the regulations were imposed as per the photographic and video evidence, it was observed that animals were treated inadequately,” said Manilal.

“If you look at the sport, you will see that the animal is tortured, people scare the animal, irritants are put inside its eyes and nose, it is poked with sharp weapons, so all this happening with the animal is cruel, you cannot overrule this fact. The Constitution of India states that any person which keeps an animal in his holding must ensure that there is no unnecessary suffering caused to the animal. So, when the law states that unnecessary suffering is prohibited, the lawmakers should understand that why would they promote such a tradition which is causing unnecessary pain to the animals,” he added.

Echoing similar actions Jaya Simha, member, Animal Welfare Board, said that it is unwarranted to use executive action to make way through the Supreme Court ruling against Jallikattu.