With the Central Reserve Police Force getting a new boss at its helm, the force is undergoing a gradual change with focus on building a better team spirit and training. K Vijay Kumar, the recently appointed CRPF Director General, has informally introduced a system of training called the 'One Minute Drills'.

The one-minute drill is a series of exercises that CRPF personnel have to do in a minute, which includes individual as well as team exercises. The drills are compiled in a book brought out by the National Police Academy, Hyderabad, which was earlier headed by the CRPF chief. Kumar, a 1975-batch IPS officer of Tamil Nadu cadre has compiled the book. Of the many drills, the most interesting one are related to cleaning of two guns at one time and life saving techniques that can be used when countering anti-national elements including the Naxals. The drills also include quick techniques for jungle survival, camouflage and undertaking unarmed combat.

"The focus of the new chief seems

to be on ensuring that the men are trained well. After all for every operation, a right bend of training is most essential," a source at the CRPF Academy in Gurgaon said. It was at this academy that Kumar introduced the concept of the 'one minute drills'. Interestingly, Kumar who himself follows a tough exercise regimen is said to have cycled his way to the training Academy from the Gurgaon toll gate, a good five kilometres away. Kumar was made the CRPF chief early this month, after his predecessor Vikram Srivastava was moved out following a series of debacles at the hand of the left-wing extremists.

Kumar, who shot to fame after he led the Special Task Force which killed forest brigand Veerapan, first visited Chhattisgarh, which has seen a series of Naxal violence, as soon as he took over. "My priorities are to see that things (indicating operations and other aspects) going on are more purposeful... also keeping in mind the governments view and agenda," Kumar, told reporters after taking charge on October 6.
Source: PTI© Copyright 2021 PTI. All rights reserved. Republication or redistribution of PTI content, including by framing or similar means, is expressly prohibited without the prior written consent.
Related News: Vijay Kumar, Central Reserve Police Force, CRPF Academy, IPS, Special Task Force
SHARE THIS STORY
Print this article
J&K: One dead as protests rock Sopore 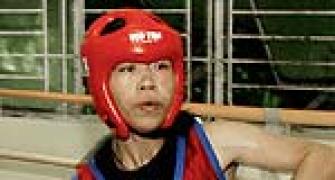