"The Delhi police is hereby directed to lodge an FIR under relevant provisions of the Indian Penal Code and file a report in this regard on January 6, 2011 the next date of hearing," Metropolitan Magistrate Navita Kumari Bagha said.

The court rejected the status report submitted by the Delhi Police which said no offence relating to sedition and other charges were made out against Geelani and others.

It said there were prime facie cogent evidence against the accused and asked the police to further investigate the allegations and file a compliance report.

The court had earlier pulled up the police for failing to submit proper status report on the complaint filed with them on October 28 by Sushil Pandit seeking registration of FIR against Roy and Geelani.

Besides Geelani and Roy, the complaint sought prosecution of five others, including Delhi University professor S A R Geelani, who was acquitted in Parliament attack case, and Sheikh Showkat Hussain, a professor of Jammu and Kashmir University.

According to the complaint, the accused made the comments at a convention here in October on 'Azadi- The Only Way'. Hurriyat leader Geelani shared the dais with Roy and pro-Maoist leader Vara Vara Rao among others. Geelani was heckled by the audience.

The complaint filed under Section 156 (3) of the Criminal Procedure Code with the court on November 1 alleged that the government had miserably failed to initiate any action against the "culprits of the anti-India seminar so a private complaint against them has been filed." 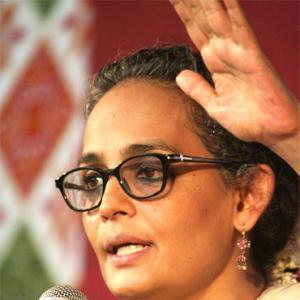 'I spoke about justice for the people of Kashmir'

Maoists are 'patriots of a kind', says Arundhati Roy