The expert noted that in India the pandemic is unlikely to be over in the months to come, and the number of people getting infected will continue to rise. Six months after a nationwide lockdown, COVID-19 is spreading fast across the length and breadth of India with more testing and developments on the vaccine front but no clarity on when the disease will be controlled, say scientists.

On March 24, Prime Minister Narendra Modi announced a 21-day lockdown for the entire country, stating it was the only way to break the chain of infection.

At the time, the number of people infected with the SARS-CoV-2 virus was a little over 500 and the death toll 12.

Six months on, India has the second highest number of cases in the world after the United States with a tally of 57.32 lakh cases, 86,508 people testing positive in a day and a total of 91,149 fatalities, according to Union health ministry figures on Thursday.

As COVID-19 rages -- and even laypersons get conversant with the complexities of RT-PCR tests versus the cheaper but not so reliable rapid antigen tests -- US-based economist and epidemiologist Ramanan Laxminarayan said there is a “hidden epidemic” happening even as the pandemic spreads.

He noted that the infection is spreading widely across all parts of the country, including into rural India, although the visibility is lower in places where testing is weak or inadequate.

“We will likely see some increases in states like UP and Bihar but only if RT-PCR testing increases. Right now, we have a hidden epidemic in many parts of the country which have weak health systems,” the director of the Center for Disease Dynamics, Economics & Policy in Washington told PTI.

“While the infection is spreading at a slower rate than if people were not taking precautions, it is definitely not under control,” Laxminarayan added.

However, he expects the number of cases to start coming down in the next month or two as India approaches some sense of “population immunity”. As a substantial number of the population is infected and recovers from the disease, they are unlikely to spread the virus.

“Given the precautions that are being taken both by the government and individuals, the epidemic has slowed down. This would mean that we would see a sustained plateau for a while before the cases start coming down,” Laxminarayan said.

On March 23, a day before the prime minister announced the lockdown and two days before it came into force, India had tested 18,383 samples.

The recoveries have gone up to over 46 lakh people, pushing the national recovery rate to 81.55 per cent.

Immunologist Satyajit Rath sounded a note of caution and said India is still at the stage of spreading viral infection across communities.

“With global, international travel as the point of origin, the infection was first established in urban high-density localities, and is now spreading from those into the rest of the country, at widely varied speeds,” Rath, from the National Institute of Immunology in New Delhi, told PTI.

The infection has never really been under control in India, he said.

"The early harsh prolonged lockdown somewhat delayed the large-scale establishment of the infection. But 'control' has never been a possibility. So we are certainly going to see growth in the infection numbers for quite a long while yet,” Rath added.

Immunologist Vineeta Bal concurred with Rath, saying the Indian government did not learn much despite experiences from other parts of the world and announced complete “draconian lockdowns” that were extended for long periods.

“Leadership in the country lacked in its vision and could not get a sense of the ground realities for poor people; or maybe did not care,” Bal, from Pune's Indian Institute of Science, Education and Research, told PTI.

“Because of major undermining of public health infrastructure for decades, our epidemic handling preparedness was very, very poor. That could have been the only justifiable reason for imposing the lockdown,” Bal added.

He said there were many positives about the control strategy, including an early recognition of the threat faced by India, and an early lockdown though the implementation and planning could have been much better.

“The lack of early testing really cost the country. With better and more expanded testing early on, that India was fully capable of, the lockdown could have been more targeted rather than been nationwide.

“Since then, there has been much confusion on the scientific communication, including on the prospects for a vaccine and the utility of hydrochloroquine. The performance across different states has been very varied depending on their health system capacity,” he noted.

“It somewhat delayed the large-scale establishment of the infection, but it did that at the disproportionately massive cost of disruption of already fragile livelihoods, of the economy, and of healthcare systems,” he explained.

Bal also pointed out that India has been paying for its long-term neglect of healthcare infrastructure that should accessible to the poor and the needy.

“While there have been serious efforts to build infrastructure, upgrade facilities in the past six months, what has been done is still not enough,” she added.

Discussing the vaccine, on which rest the hopes of billions of people globally, the experts said there are almost 200 efforts across the world to build and test candidates.

A large number, growing by the week, are in clinical trials of actual efficacy.

In India, there are at least eight vaccine candidates being developed, two of which have entered Phase 2 trials or the penultimate stage.

“In all likelihood, a number of vaccines will emerge. Optimistically, the first vaccines will probably be licensed by the end of this calendar year,” Rath said.

“Further, the first-generation vaccines are likely to provide significant but not complete protection, and it will not be clear how long protection will last and how well booster vaccination will work,” he said.

Laxminarayan, also an affiliate professor at the University of Washington, added that it is too early to know if any of the vaccine candidates under development in India will play a major role in COVID-19 control in the country.

“However, one should hope that,” he said.

“This is the first disease in human history, to the best of my knowledge, where candidate vaccine trials began in less than eight-nine months from the day the virus was identified and its sequence published. This is a major technological achievement,” Bal added.

The expert noted that in India the pandemic is unlikely to be over in the months to come, and the number of people getting infected will continue to rise.

Shakoor Rather
Source: PTI© Copyright 2020 PTI. All rights reserved. Republication or redistribution of PTI content, including by framing or similar means, is expressly prohibited without the prior written consent.
SHARE THIS STORY
Print this article

'We are moving fast towards the peak of the epidemic' 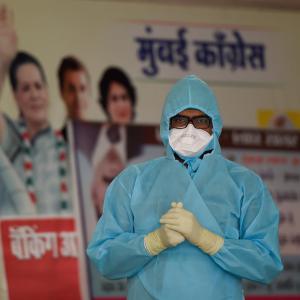