Mumbai police officer Sachin Waze, arrested in the probe into recovery of explosives from a car near industrialist Mukesh Ambani's residence, was on Sunday remanded to the National Investigation Agency custody till March 25. 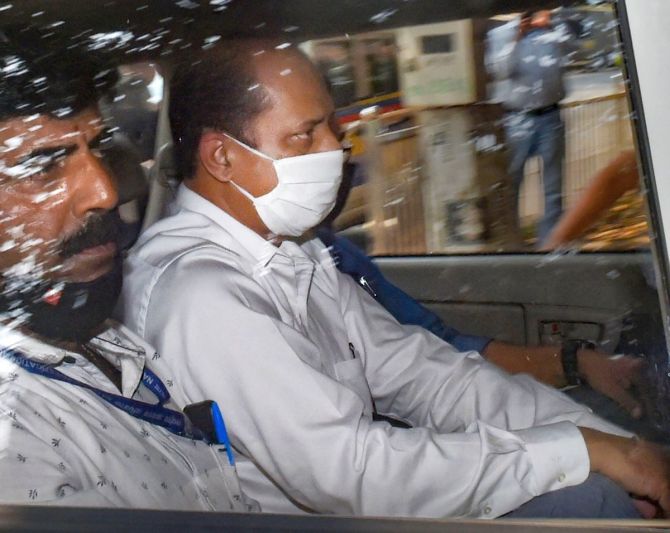 IMAGE: Police officer Sachin Waze being taken to court by National Investigation Agency for a hearing, in connection with a probe into the recovery of explosives from a car parked near industrialist Mukesh Ambanis house, in Mumbai. Photograph: Mitesh Bhuvad/PTI Photo

The NIA, which arrested Waze (49) on Saturday night, brought him to the court in south Mumbai after taking him to a local hospital for his medical examination, an official said.

The court remanded him to the central agency's custody for further probe in the matter, he said.

The NIA, while seeking Waze's custody for 14 days, told the court that they had received some inputs about his role in placing gelatin sticks in the SUV that was found parked near Ambani's house on February 25, and that when he was questioned about it, he admitted his involvement.

Following that, Waze was placed under arrest, the probe agency said.

Waze has been arrested under IPC sections 286 (negligent conduct with respect to explosive substance) 465 (forgery), 473 (making or possessing counterfeit seal, etc with intent to commit forgery), 506(2) (punishment for
criminal intimidation), 120 B (criminal conspiracy) and relevant provisions of the Explosive Substances Act, the official said.

In its remand plea, the NIA submitted witnesses' statements to show Waze's involvement in the case.

The central agency also told the court that his custodial interrogation was required to unearth the conspiracy and gather evidence.

Talking to PTI, Waze's advocate Sudeep Pasbola, however, said the arrest has been made only on the basis of suspicion and that there was no concrete evidence against him.

"The court remanded Waze till March 25, but kept the matter for further hearing on Monday. The court has asked the NIA to show what evidence it has collected and what is the stage of investigation," Pasbola said.

Waze was summoned at the agency's Mumbai office at Cumballa Hill in south Mumbai around 11.30 am on Saturday to record his statement.

The spokesperson said that Waze was arrested after being questioned by NIA officials for around 12 hours.

The case was handed over to the NIA after the mysterious death of Thane-based businessman Mansukh Hiran, who claimed that the vehicle had been stolen a week earlier. His body was found in a creek at Thane on March 5.

Hiran's wife had claimed that her husband had given the SUV to Waze in November, which the officer returned in the first week of February. However, during his questioning by the ATS, Vaze had denied using the SUV that was in possession of Hiran.

Credited with eliminating 63 alleged criminals in 'encounters', Waze, a 1990-batch officer of the state cadre, was suspended in 2004 over his role in the custodial death of a 2002 Ghatkopar blast suspect Khwaja Yunus and was reinstated last year.

Waze, who led the team that arrested journalist Arnab Goswami in November last year in a suicide abetment case, had joined Shiv Sena while he was under suspension. 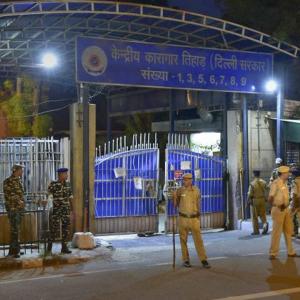 Sachin Waze fails to get bail, poses before NIA