One in 15 individuals aged 10 years and above were estimated to be exposed to SARS-CoV2 by August 2020, showing that a considerable population is still susceptible to COVID-19, according to the Indian Council of Medical Research's second sero-survey findings released on Tuesday. 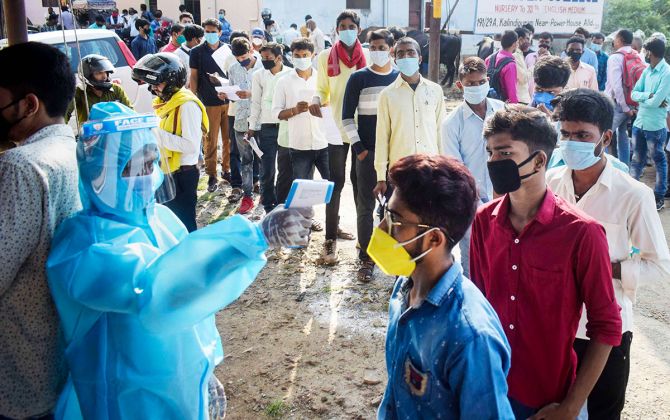 IMAGE: Applicants undergo thermal screening as they arrive to appear in University of Allahabad's UGAT exam at a centre in Prayagraj. Photograph: PTI Photo

He said lockdown, containment and behavioral change at population level have effectively checked the potential spread of SARS-CoV2, however the survey findings show that a considerable population is still vulnerable and susceptible to coronavirus.

He further said that the risk in urban slums was twice than that in non-slum urban areas and four times the risk in rural setting.

"Urban slums (15.6 per cent) and non-slum (8.2 per cent) areas had higher SARS-COV2 infection prevalence than that in rural areas (4.4 per cent)," he said quoting the second sero-survey.

"One in 15 individuals aged 10 years and above were estimated to be exposed to SARS- CoV2 by August 2020," Bhargava said.

The second sero-survey was conducted in the same 700 villages and wards from 70 districts from 21 states which were covered during the first survey.

The first sero-survey of May 2020 revealed that the nationwide prevalence of novel coronavirus infection was only 0.73 per cent.

The second survey further showed that there is a lower infection to case ratio in August compared to May which reflects a substantial increase in testing and detection across India.

Health Secretary Rajesh Bhushan said India has 4,453 COVID-19 cases and 70 deaths per million population which is among the lowest in the world.

NITI Aayog member V K Paul urged people to keep following COVID appropriate behaviour, saying there is no reason to get lax if stability in coronavirus cases is observed.

"We need to have Puja, Chhath, Diwali and Eid with masks, it is very important to keep that in mind. We have seen a second peak in Delhi, Kerala and Punjab so we should not get lax and keep following COVID-appropriate behaviour," he said.

People are more prone to respiratory infections like pneumonia and influenza in the coming winter months and festive seasons and "we have to put in all efforts, stay vigilant and diligently follow COVID-appropriate behaviour", Paul said. 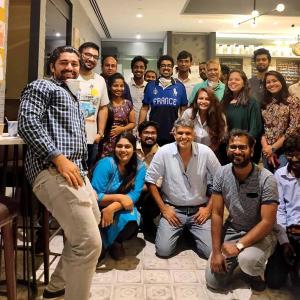