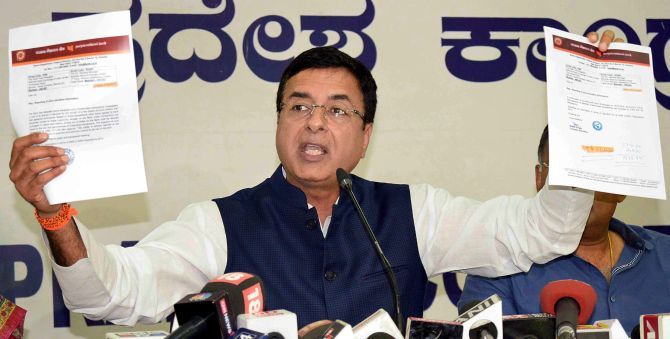 The Congress on Thursday raked up yet another 'scam' of Rs 6,712 crore by jeweller Jatin Mehta of Winsom Diamonds to target the government and asked Prime Minister Narendra Modi to break his silence on who provided protection to him for over 3.5 years.

Congress communications in-charge Randeep Surjewala alleged that Mehta, who hails from Palanpur in Gujarat, and his family were allowed to leave India even when there were complaints pending against him with the CBI since February 2014, but an FIR was lodged only in April 2017.

He claimed Mehta's modus operandi was the same as Nirav Modi and Mehul Choksi by collecting money from banks through fake letters of undertaking (LoUs) and fleeing the country thereafter.

Gold was imported based on letters of credit issued by Indian banks and jewellery was exported to 13 entities in Dubai, who refused to pay back, he further claimed.

The Congress leader alleged that a scam is emerging every day since the last 12 days, alleging that the 'Jan-Dhan-Gaban Yojna' has peaked to Rs 39,000 crore.

"Here is yet another fraudster who was allowed to flee the country by the Modi government. Will Prime Minister Modi protect Jatin Mehta with his silence too? Or will the prime minister finally come clean and explain how fraudsters manage to evade the law under the watch of his 'SuitBootLootSarkar'?

"Who is protecting Jatin Mehta? Does the protection emanate on account of his close relationship with an industrial house closest to Prime Minister Narendra Modi through marriage of his son," he asked.

The Congress leader also asked the reason why the entire Modi government, including authorities have been found 'sleeping' when it comes to preventing the fraud and taking action against Mehta and his companies.

Surjewala also alleged that Mehta and his wife conveniently fled from India, gave up Indian citizenship on June 2, 2016 and settled down as citizens of international tax haven St Kitts and Nevis in the Caribbeans, with whom the government has no extradition treaty.

Surjewala said the financial statement of Winsome Diamonds for 2015-16 records the fact that banks have filed complaints with CBI/ED with receipt of a notice from Serious Fraud Investigation Office (SFIO).

He also said the company’s accounts have been classified as NPAs by banks, but 'despite all this, the Modi government and CBI remained mum'.

He said the CBI lodged six FIRs for the first time after three and half years on April 5, 2017 by taking a fresh complaint on April 4, 2017 to cover up the inaction.

"Dupe, deceive, defraud and depart is the new badge of Honour for scamsters. Modiji remains on maun vrat, as Jan-Dhan Gaban Yojana rises to Rs. 39,000 crore," he said.

Surjewala also asked why the CBI took 3.5 years to register an FIR in the case and why did the Economic Offences Wing (EOW), Mumbai Police, Enforcement Director (ED), SFIO and Ministry of Corporate Affairs/Ministry of Finance not take any action in the scam.