JK: Cong huddles up; Farooq to play a key role

A day after the all-party meeting discussed Jammu and Kashmir, the Congress's Core Group deliberated the strategy for the troubled state and a blueprint for the road ahead.

Though the meeting discussed the composition of the party delegation to the Valley, sources said no names had been finalszed. Headed by Home Minister P Chidambaram, the delegation is expected to leave on Monday.

While it is clear that there is no move to change the state's leadership with the Congress clearly backing Omar Abdullah, the Centre is looking at ways to strengthen Omar's position and ensure that he changes his style of functioning.

His father Union Minister Farooq Abdullah met both Congress president Sonia Gandhi and Prime Minister Manmohan Singh and is learnt to have assured them that all steps would be taken to see that Omar reaches out to the people.

Farooq himself is likely to play a bigger role in Kashmir politics with the government planning to use him as a mediator to reach out to a number of individuals, including the separatists and many organizations in the Valley.

The question facing the government is who should talk to the separatists and at what level should it be done.

Omar himself has set the ball rolling by meeting Governor NN Vohra and briefing him on the situation. Vohra is said to have complained to the prime minister in a meeting recently that Omar was neither accessible nor did he meet with him or communicate with him.

Rahul Gandhi's backing for Omar Abdullah during a press conference in Kolkatta where he said Omar was doing a tough job and that he needed more time has clearly sent the message across that the young Gandhi continues to back Omar Abdullah despite the widespread notion that he has not proved himself to be upto the job because of his inexperience.

It was Rahul, who had pressed Omar to be made the chief minister instead of Farooq Abdullah and judging by what he said 10 Janpath would like to give him some more time to prove himself.

Rahul also reinforced the point made by Sonia Gandhi that more youngsters in Kashmir need to become a part of mainstream politics. 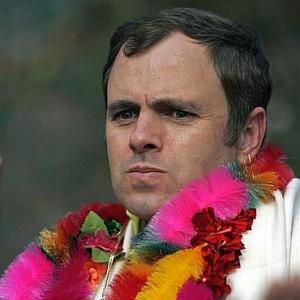 'Omar Abdullah will not resign'