Congress blames Mamata, not Mulayam, for mess over presidential nominees

Source: PTI
Last updated on: June 14, 2012 16:46 IST
The Congress on Thursday blamed Mamata Banerjee for the political mess over the presidential candidate choice in an apparent bid to drive a wedge between her Trinamool Congress and Mulayam Singh Yadav's Samajwadi Party.

"You must have noticed that the initiative to present alternative names came mainly from Banerjee and not Yadav," a senior Congress leader said speaking on the condition of anonymity.

He feels that the SP chief did not intend to oppose the United Progressive Alliance nominees but could not say no to Banerjee, who was apparently furious on coming to know about Pranab Mukherjee's candidature for the high post.

Indications from the Congress are that the party is veering round to the view that it cannot allow any troublesome ally to dictate terms on an issue like presidential poll and that the party has to prepare for any eventuality.

"We still consider she is our ally. We will not ask her to leave," the leader said when asked whether Congress-Trinamool ties will remain intact after this showdown between them on the issue of presidential polls.

Another party leader, however, expressed confidence that Banerjee will also come on board eventually on the issue.

Though he did not agree with the contention that the Trinamool Congress chief naming three new candidates was in a way challenging the authority of Congress president Sonia Gandhi, he significantly added, "We have braved many challenges."

The Trinamool Congress has emerged in recent months as the most troublesome ally of the Congress in the UPA, having shot down a number of key proposals of the government as also creating embarrassment for the UPA on issues like Teesta water-sharing agreement with Bangladesh as well as on the agreement on the exchange of enclaves with that country.

Virtually disapproving of Trinamool chief Mamata Banerjee's action of disclosing the names of Mukherjee and Ansari as first and second choices of the Congress, Dwivedi said the process of consultation was still on and Gandhi had not finalised any name.

"There is a dignity to the process. When such talks are held, names are not discussed outside," Dwivedi said.

"Disclosing three names including that of the prime minister of India, I think this is something which does not make any political or ethical sense.... Never ever there has been an instance where a sitting the prime minister name is being branded like this.

"It is a constitutional post, he heads the government and the country and one desists from such lack of courtesy... People of our country would wonder why such tactics are being adopted by political parties," she told reporters.

The minister was commenting on Banerjee mentioning three names including that of Prime Minister Manmohan Singh for the presidential race.

Soni said Sonia Gandhi was continuing discussions on the issue with leaders from the party and alliance partners. "She is going ahead with the consensus she is trying to evolve over a single name."

Asked if the Congress chief would hold another round of consultations with alliance partners, she said, "Consultations are an ongoing process. She has been empowered by the UPA to do this whether it takes two or three rounds or as long as she deems it necessary or important to have a single name with maximum support emerging."

On allegations levelled by Opposition parties that the UPA has 'messed up' the presidential polls, Soni said, "The Opposition does not have anything to say. So, they will keep saying such things."

Soni said the Congress president had discussed the issue with Banerjee as she is an ally and taking her along was "important and necessary".

Asked if the Congress would try to evolve a consensus over one of the two names suggested by the party chief, Soni said, "I cannot say which name will emerge later. It is not possible for me to say as till the time the Congress president herself announces that a particular name has emerged for which the maximum support has emerged." 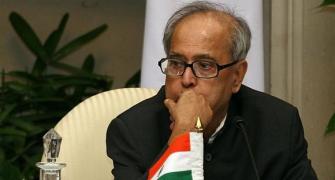 Cong gets desperate, Pranab turns to Left for support
RJD to go along with Sonia's choice: Lalu
The new President also needs to lead our defence forces